A few weeks ago, I noticed #onedayhh floating around my social media. The idea was to document your day hour by hour so you have a little photo record of an ordinary day. I wanted to participate, but that was the day I was in Philadelphia for work so it was anything but an ordinary day for me.

Instead I decided I wanted to do a blog post documenting a normal day in my everyday life. I always enjoy reading these types of posts on other blogs and honestly, I love the idea of having a record of an ordinary day with LJ at this stage of life to look back on someday. I chose Friday, November 16 as a day to document.

A few disclaimers: this post will be long and contain a lot of pictures! They are not perfect pictures. Some pictures are dark or grainy. They reflect our true day (aka no make-up, the house not totally in order) but that’s our real life so I’m embracing it.

Lately, I have been trying to get up when Justin leaves the house for work around 6:30/6:45 to have some quiet time to eat breakfast and complete my morning devotions. On this particular morning, I listened to my body when it begged for a little more sleep and didn’t get up until I heard LJ around 7:15 am. I got up, made my bed (which really just involves pulling up the sheets but I feel like this small thing makes a big difference!) and headed into the nursery.

I’m still breastfeeding so LJ and I spent some time in the rocker so he could nurse. These quiet morning moments are so precious to me – I know we won’t always have this time so I’m cherishing it now. 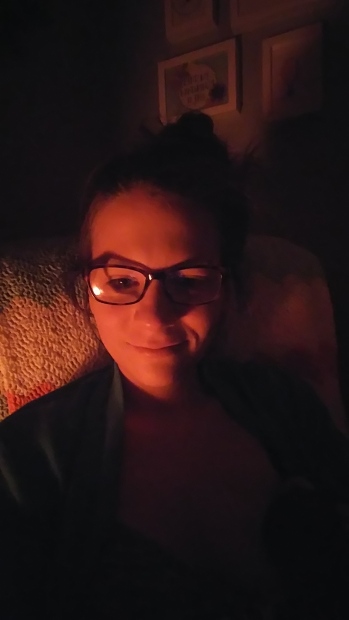 We headed downstairs around 7:30. I had made a big batch of pancakes earlier in the week so I put LJ in his high chair and reheated two small ones for him. While they were warming up I let the dogs out, put food in the dog bowls, got out some blueberries to cut up for LJ, and poured myself a bowl of cereal. We ate our breakfast together and I loaded up the dishwasher as LJ finished his last few bites. 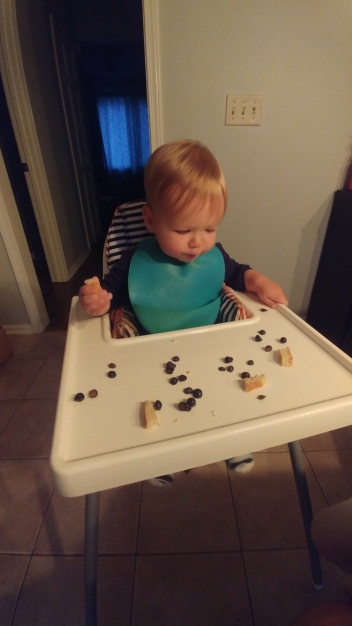 We headed into the playroom around 7:55 and played together for the next 45 minutes.

I put LJ down for his morning nap at 8:40 and quickly brushed my teeth, changed into workout clothes, and headed downstairs. Normally I start working for my part-time job as soon as nap time begins but since I had slept in this morning, I first completed my daily bible study. 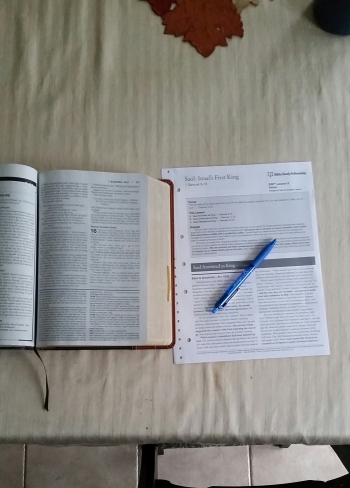 By 9:00, I was at my desk working for my part-time administrative job. (If you’re curious to read more about what I do, I wrote a blog post about it here).

I quit working when I heard LJ wake up around 9:40. He was in such a good mood after his nap! 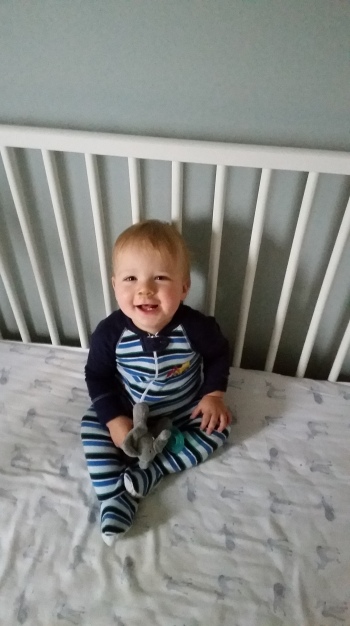 I changed his diaper and outfit and we headed downstairs to the playroom again. LJ played while I checked his diaper bag contents to make sure it was all set, got my tennis shoes on, and let the dogs out again.

I generally don’t worry about picking up the playroom during the day, but since I wanted to run the Roomba while we were gone, I quickly picked up the toys and put them away. I also quickly threw in a load of laundry. (My laundry style is: it all goes in one load. Makes life easier!)

I grabbed the diaper bag and started the Roomba on our way out the door. (Side note: the Roomba was a purchase I made with money I received recently for my 30th birthday and it was so. worth. it. I can’t emphasize enough how much of a game changer this is with keeping dog hair under control!) 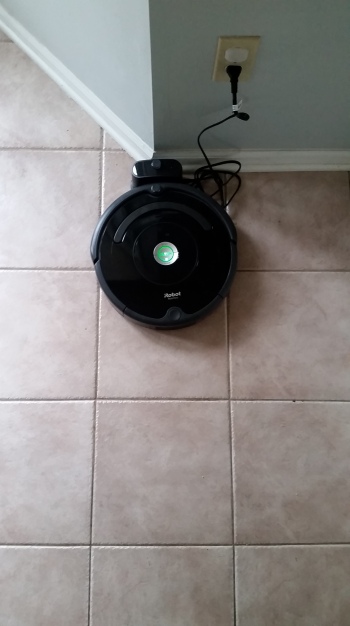 We left the house around 10:05 and arrived at our local YMCA in plenty of time for me to drop off LJ in childcare and make it to my hour-long bootcamp class.

My Friday bootcamp class takes place in the gymnasium and is set up like an obstacle course involving a combination of cardio and weights. Here is an awkward selfie I took while the course was getting set up. Ha!

After the class I headed back to childcare to pick up LJ. My friend who works in the childcare area snapped this pic of us before we left. LJ had a great time playing, which was awesome! He’s at the stage where he’s realizing when mommy is leaving him and sometimes he really struggles with being “left behind” so I’m glad today was a good, fun day for him!

We arrived back home around 11:50. LJ went straight into his high chair for lunch. Since the laundry room is attached to the kitchen, I took a few minutes to move the laundry from the washer to the dryer and empty the Roomba filter.

For lunch, LJ had chicken salad and avocado slices. I had leftover grilled cheese and soup from the previous night, as well as the second half of the avocado. 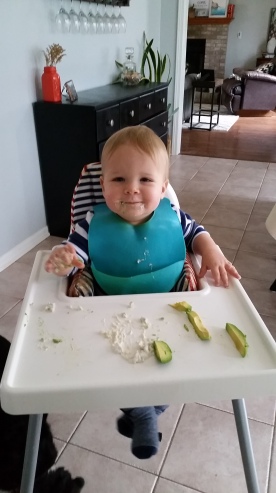 LJ ate a banana for “dessert” and while he ate, I prepared ingredients to throw in the crockpot for a potato soup for dinner. 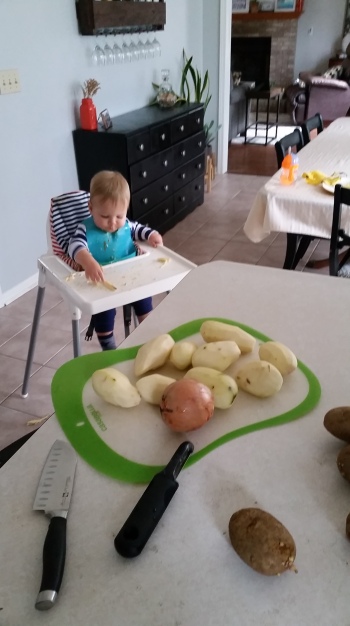 By 12:30, LJ was done eating and ready to get out of the highchair so I cleaned him up, changed his diaper, and set him up in the playroom. I wasn’t quite done prepping the soup, but I was able to see him from my workspace in the kitchen so I finished up the soup while he played independently out of the corner of my eye.

By 12:45, the soup was ready to cook so I set the crockpot, piled dishes in the sink for later, and headed to the playroom to play and read some books with LJ.

Around 1:45, LJ was rubbing his eyes so we headed upstairs. I nursed him and put him down for a nap, then headed back to my desk to complete the rest of my work for my part-time job. 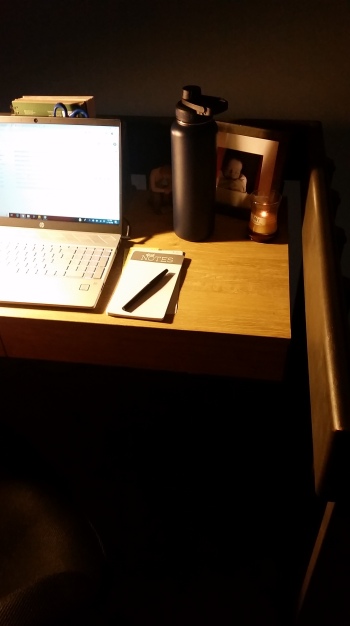 By 2:50 I was finished for the day with my job and LJ was still sound asleep. I headed into my bathroom with the monitor to take a quick shower. (My monitor screen is sound-activated. It’s black when his nursery is quiet and the screen will automatically turn on if he’s making noise. So I can just have the shower curtain pushed back a little to see the monitor screen and keep track of his nap). 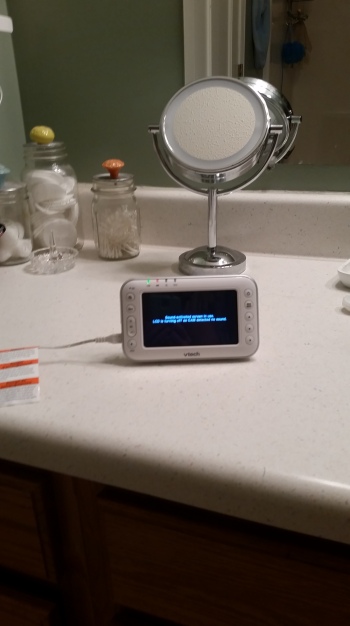 After the shower, I had a few things I wanted to get done while LJ was still napping but wasn’t sure I had enough time to do everything so I prioritized the things that are harder to do when he’s awake. I went downstairs and brought up the laundry from the dryer. I left it in the basket and just changed my own clothes. 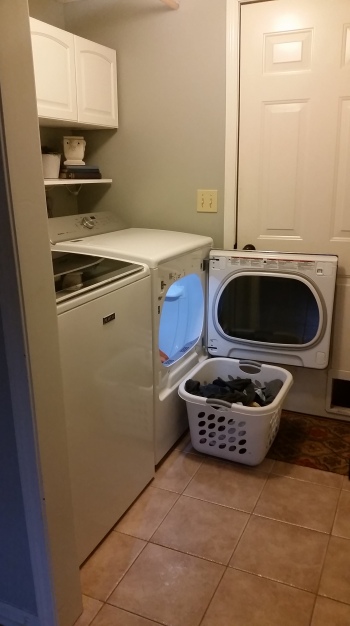 My days are too busy to devote a ton of time cleaning but I’ve found if I have one cleaning task each day, I can maintain a decently-clean state of my house more easily. Friday’s task was vacuuming the carpet, which is on the stairs and second floor (the Roomba stays on the first floor). I knew this had a chance of waking LJ up but hoped it would blend in with his sound machine.

I swept the stairs, the hallway, and all bedrooms except the nursery, which took about 8 minutes. LJ was still asleep so I began to fold some of the laundry, although I didn’t get through much before he woke up.

LJ woke up at 3:20. I got him up and held him while I quickly vacuumed his nursery. Then we headed into my bedroom where he played with the toys I keep in there while I finished up folding and putting away laundry.

We headed downstairs around 3:40. LJ had a snack of puffs and water while I quick put away the vacuum, watered my plants and returned the downstairs laundry. By 3:50 we were out the door to run a few errands.

Our first stop the Verizon store to pick up new screen protectors. Since it was such a quick stop, I took LJ inside in his car seat and he was not a fan. Ha! 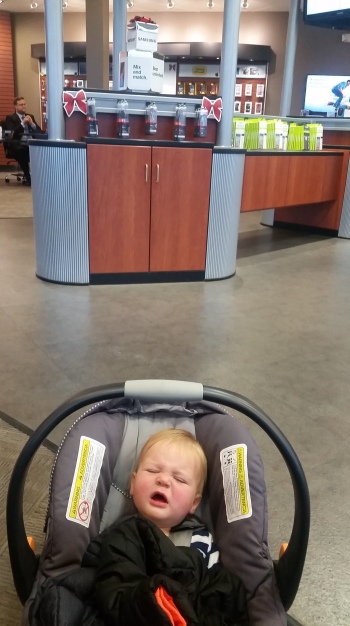 I stopped for a quick pick-me-up at Smoothie King and we headed to Costco.

It is all decked out for Christmas and it was so fun to see LJ’s reactions to all the gigantic holiday items.

By 5:30 we were done with errands and back at home. I grabbed the mail on the way in and sorted it in the playroom with LJ’s “help.”

We headed back in to the kitchen and I finished up the last few steps of the crockpot soup while my sous chef looked on from his high chair.

By 5:55 we headed upstairs to my bedroom where LJ played with his toys while I did my hair and make-up.

The best part of our day happened at 6:30 – Justin came home from work! LJ is always SO excited to see daddy and today was no exception.

We ate a quick supper together and I nursed LJ one more time before leaving my boys at home around 6:55 to head to a Favorite Things Party with a women’s small group I am part of. 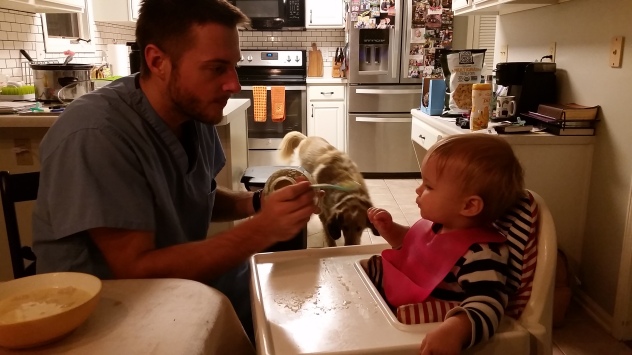 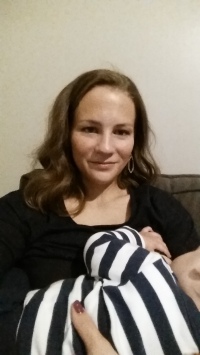 I had never been to a Favorite Things party before but I compare it to a White Elephant gift exchange except every item is something you actually want. We each brought two items (a $ value is set so everyone’s gifts are about the same price) of the same thing and left with two different items. I took nail polish and nail buffers but there was a huge variety of items – candles, coffee, books, snacks, kitchen utensils, you name it! It was so so fun!

I left with a pair of cute earrings and nesting houses.

I got home a little after 9:30 and immediately changed into pajamas. Justin was watching TV and I caught up on social media and settled in with The Book Thief. It was so cozy to snuggle up with a book and blanket in front of the Christmas tree we had put up earlier in the week on Justin’s day off. 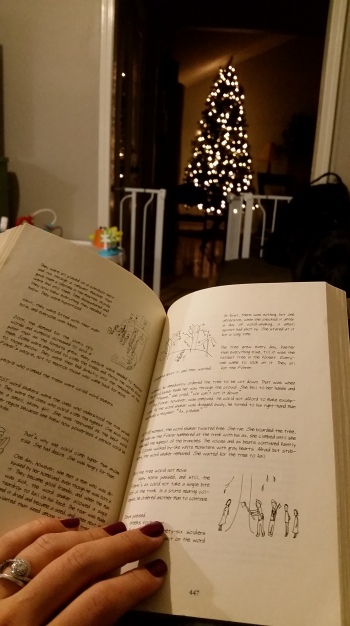 We headed up to bed around 11 but I was hooked in my book and nearly finished reading so I stayed up until 12:00 so I could finish. Thank goodness the next day was Saturday!

Looking back, I’m so glad I have an ordinary day documented. LJ is changing so much and our days already look so different than they did six months ago. I think I’ll have to do one of these posts every so often because I love that they serve as a kind of time capsule for our life!