It’s time for my favorite post of the month – my book reviews!

I read four books this month and they’re kind of all over the place. Two non-fiction and two fiction. One memoir and one self-help-ish. One about a plane crash and one that crashed in other ways for me. It was a fun mix of reads! Let’s dive in! 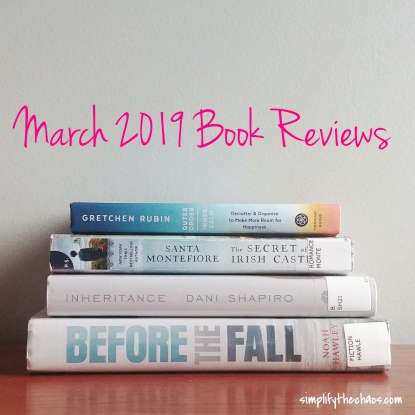 It’s no secret that I love Gretchen Rubin so I’ve been anxiously awaiting her new book for months. It finally came out in March and I snapped up a copy (you know I’m excited when I actually buy the book instead of check out from the library) and flew through it.  This is a very quick read chuck full of inspiration for making small choices and changes towards clearing clutter to make more room in your life for order, calm, and happiness. In other words, pretty much all my favorite things in one place. 🙂  I started off underlining little nuggets of wisdom that particularly spoke to me, but I quickly realized that I would be underlining most of the book so I had to stop. It was just full of tips, tricks, and smart little hacks. I’ll stop gushing now because I think my inner nerd is showing  (ha!), but I really loved this book and will likely incorporate it into a full blog post at some point in the future. I highly recommend it if you need a little push in the right direction to make changes, big or small, towards a less cluttered life.

The Secret of the Irish Castle by Santa Montefiore

I happened to see this book on the shelf as I was checking out at the library and it peaked my interest but I had a lot of books already so I didn’t check it out. Then on another trip, I saw it again on a different shelf and took that as a sign I should read it. I’ll be honest, this book did not meet my expectations. It really seemed like it was going to be my jam: historical fiction, WWII Europe, family secrets and mysteries, what’s not to love? The Amazon blub even raves that it is “perfect for fans of Kate Morton and Beatriz Williams” and I adore both authors. So I was pretty disappointed when about 70 pages in I kind of just wanted to quit reading. This story just fell flat for me. There are SO many characters and plotlines and it feels really soap opera-y and hard to keep track of. I did find out afterwards that it’s part of a series, so maybe it wouldn’t have seemed so overwhelming and confusing if I had read the other books too? I don’t know. I kept reading because one storyline did interest me and I wanted to see how that particular one turned out. Overall, I felt like this book was just okay, but I really don’t have any interest in reading the rest of the series.

I started this book because it was the first chosen book of the Happier Podcast book club and I was instantly intrigued. The author takes a DNA test without thinking much about it and is rocked to her core to find out that the father who raised her was not actually her biological father. Since both of her parents are deceased, she begins a journey of research and discovery to find out as much as she can about the truth of her origin. Her memoir is poignant and thought-provoking and touches on the deeply held beliefs we hold about ourselves. I could not stop talking to Justin about it as I was reading, and I’ve brought it up in several other conversations with other people since. It was just absolutely fascinating and I think it would make an excellent book club read! Highly recommend!

Before the Fall by Noah Hawley

I wouldn’t say I have a fear of flying but I definitely have increased anxiety on planes so a book about a plane crash is not exactly my normal pick. I enjoyed this one though! The plane crash actually happens very early on in the book and the rest of the story jumps back and forth between the lives of the victims before the crash and the present day where a team of agents try to unravel the mystery of why the plane crashed. A media circus forms around the two survivors of the crash: a four-year-old boy who is now worth millions and a man who swam them both to safety. Controversies and theories form about the man who was an unexpected passenger in the first place and he alternates between victim and suspect throughout. This book is part mystery, part thriller and I got really into it! There are some characters you root for, some you despise, and there were enough surprises to keep me guessing until the end. Overall, this was a good read!

That’s a wrap on my March reads. What is on your reading list this month?

Still needs caulk and some touchups, but I am really digging the evening light + new backsplash combo. 😍
This new planter brings a fun pineapple vibe to the playroom and I'm not mad about it. 🍍
March Book Review!
Bye-bye brown kitchen! 👋
Justin noticed a deer antler by the side of the road on his recent bike ride and I may or may not (but definitely did 😅) have had him drive back to the spot and get it for his office bookshelf. It was just the missing piece that this shelf needed!
One year and a pandemic in between these pictures 👉
Follow simplify the chaos on WordPress.com