This past weekend Justin, LJ, and I packed up the car and road tripped out to Virginia to spend Easter weekend with Justin’s family. Since they live so far away, we don’t get to see them as often as we’d like so it was wonderful to have lots of quality time together. I more or less unplugged from social media, which was also a nice change of pace. Today I thought I’d just share a few pictures from our weekend.

Before we left on Friday morning, we stopped in at a local men’s salon for…LJ’s first official haircut! Insert all my mama emotions here.

I love his wispy blond hair but it was just getting sooo long – it was getting in his eyes and was starting to look a little mullet-like so we decided it was time.

The place we went was amazing! They had him sit on Justin’s lap and turned the little TV in the booth on to Paw Patrol so he was pretty mesmerized the whole time. He’s a little ticklish around the neck so there were a few flinches but the hairstylist was so patient with him and we’re really happy with the end result. Overall, LJ did way better than we expected! They gave him a little certificate for “graduating babyhood” with his first haircut. Beforehand, I’m not sure I would have said this was “the step” to no longer being a baby but afterwards I see where they’re coming from because he immediately looked SO. MUCH. OLDER. Justin and I could not get over how he looks like a full-fledged toddler now. 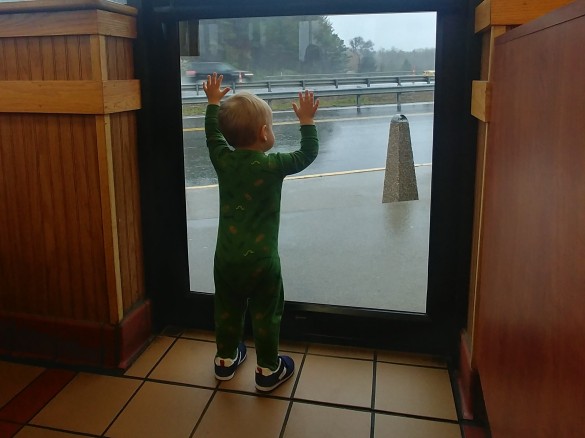 After the haircut excitement we headed out to Virginia. LJ did great on the trip and we made decent time. We arrived Friday night and left Tuesday morning. It was a fantastic weekend with family! A few highlights include: 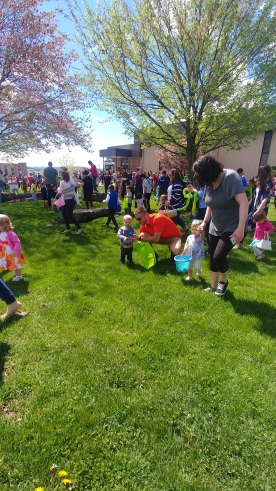 A mega Easter Egg hunt! Justin’s brother’s church puts on a giant egg hunt for the community and there were SO many people there. Do you see all the people in the grass? This is just the 4 years and under hunt – it was crazy! LJ and his youngest cousin (bottom of the left picture) were more fascinated with the chaos happening around them and we really had to work to get them to focus on picking up an egg. It was pretty hilarious actually. By the time they caught on, the eggs were mostly gone. LJ got three eggs which honestly was two more than I was expecting him to get so overall it was a success. 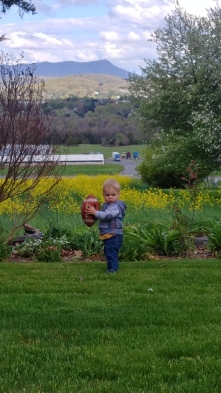 We also spent a ton of time outside. LJ was obsessed with the basketball hoop and we spent hours out there playing. It was so sweet to see him with our 6-year old nephew (middle picture) who is so sweet to him. They are the only boy cousins so far and they already have a special little bond. 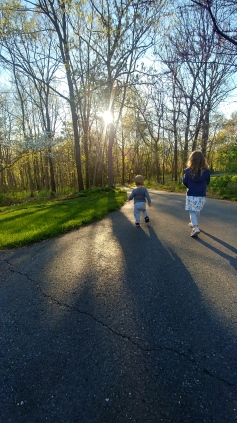 Can’t forget about our sweet 4-year-old niece who also loved playing with LJ. In this picture they are heading off to find the cat that is hiding along the edge of the woods. 😉 Since none of my siblings have children yet, these are LJ’s only cousins and I just love watching their little relationships blossom. Plus, I feel like this picture just captures something magical about spring evenings. 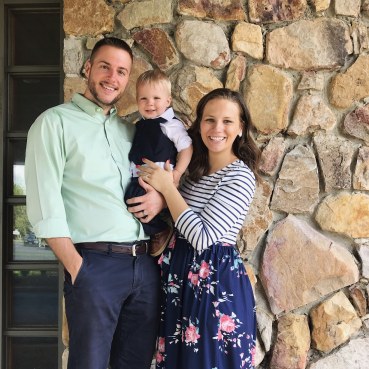 My little growing family attended my husband’s home church on Sunday. It was extra special because my sister actually lives in the area and she was able to join our festivities!

Easter Sunday is one of my absolute favorite days of the year. The music is always so worshipful and inspiring and I love celebrating the fact that Jesus not only died for our sins, but also rose again and we now have eternal life in Him. It brings me to tears every year!

And last but not least, it was pretty hilarious to watch LJ open his Easter basket – in true toddler style, he only cared about the tissue paper. 😉

Easter always feels like the true kick-off to spring, so I’m excited for warmer weather, blooming flowers, and more and more time outside!