I can’t believe another month has come and gone. How is it already July!? Summer is absolutely flying by and I have mixed feelings about it. One the one hand, we get to meet baby at the end of summer! On the other hand, I don’t want to wish away any of this amazing warm weather. This week Justin, LJ, and I are vacationing with Justin’s family in Virginia so I’m just going to post my book reviews and get back to enjoying our week!

All the Missing Girls by Megan Miranda

The premise of this book was very intriguing to me: ten years ago, a girl went missing in a small town in North Carolina and she was never found. In present day, another girl goes missing and all the same suspects from ten years ago are still around. The story takes place over the course of two weeks, but the kicker is: it is told in reverse. We start at Day 15 and work backwards to Day 1.  I think I liked the concept of reverse story-telling better in theory than in reality. Typically, as things are revealed to characters, they are also revealed to readers; in this scenario, I knew that there was a lot of information that the characters obviously knew on Day 15 that was being withheld. It actually ended up making the first half of the story seem very slow and a little confusing. Around Day 7, I felt like more and more relevant information was being revealed and my interest level grew, although there were things that happened in “earlier” days that almost confused me further because nothing in the “later” days hinted that they had happened. It just wasn’t really my kind of storytelling, and I ended the book feeling like I needed to reread the story to really understand all the things I missed (but I honestly just didn’t even care enough to do that this time). That being said, there were some twists and turns that I did not at all see coming, so if you like unique storytelling you might want to give this one a shot. 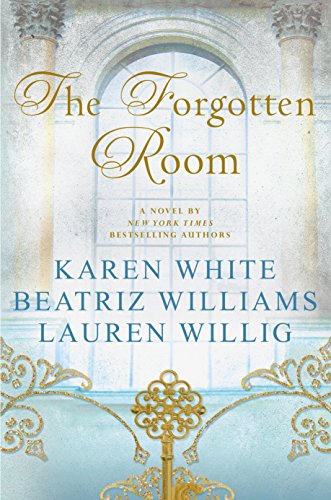 I love Beatriz Williams and have re-capped several of her books before, so I was excited to learn that she had co-authored a book with two other authors. This story centers around the Pratt Mansion, a glamorous house built in Manhattan in the late 1800’s and follows three women and their experiences in the house throughout history. In particular, each woman has unique encounters in a very special and mostly unknown attic room. So what was interesting about this story is that through the alternating stories of Olive (1890’s), Lucy (1920’s), and Kate (1940’s), you almost immediately start to form conclusions about how these women are connected. Even though their connections to one another weren’t very surprising, there were aspects of what exactly happened to each woman and her relationships and connections (with men in particular) that kept me guessing until the end. I thoroughly enjoyed this book as a great historical fiction but I will say that it left me a little heartbroken. These characters all became so real to me and I knew that they couldn’t all necessarily have happy endings; the story I connected with the most was not one that ended how I hoped. Nevertheless, I did really like the book and would recommend it to my fellow historical fiction lovers!

The Lost Man by Jane Harper

A man is found dead in the middle of nowhere in the Australian Outback. No one knows how he ended up stranded in the unforgiving, and ultimately deadly, heat with no shelter except a small gravestone. There are virtually no clues and only a bunch of questions. As his family tries to process his death and find an explanation, we find that things aren’t always as they initially appear. I took this book along with me on our Bahamian Babymoon, but since I dove into The Clockmaker’s Daughter first, Justin ended up reading it before I did. I thought it’d be fun to have him share his take on it before I give my thoughts. So here he is with his blogging debut! 😉

“Overall The Lost Man was a fun vacation read for me.  It kept me wanting more because the story began with little to no background and the death was revealed very early with again, little to no information or leads.  The author is apparently, so Sarah tells me, known for incorporating the environment/mother nature as a key element in her stories.  As someone who has never personally experienced the Australian Outback, I found her details quite exciting.  Anyway, as the story goes on, you are given more and more present time clues as well as important historical information about the atypical family and their atypical relationships. The book had a good pace and unlike a lot of other reads does not wait until the last 20 pages to drop bombs of the most exciting of details. Of course it has its ending that you wouldn’t have expected, but it wouldn’t have been a publishable story without that…am I right?  Thanks for having me on your blog today Sarah.  I’m sure this is just a one hit wonder type deal (or more like one and done, no hit or wonder about this…)”

Ha! Thanks babe! I honestly don’t have much to add. As with her other novels, Harper uses the environment like an actual character. It made me want to constantly have water next to me while reading because the hot, dry landscape just seemed so real and so very desolate. Throughout the story I formed a bunch of different thoughts about what happened, but I was still very surprised by the ending of the story. I was hooked from start to finish!

I saw this book for sale in Costco several months ago and, after reading the synopsis inside, made a mental note to add it to my reading list. I recently saw it pop up on another blog’s book review and it inspired me to finally snag a copy from the library. IN this story three girls meet as roommates in college and become best friends/frenemies with complicated relationships. Twenty years later, one of them ends up dead under strange circumstances and their love/hate relationships with one another through the years may or may not have played a part in this death. I’ll be honest, this book was kind of disappointing for me. It had elements of psychological thriller, mystery, murder – all things that I normally am interested in reading about and I wanted to love it. I think my disappointment came down to one major hitch: I hated all the characters. To her credit, Campbell wrote each of the characters to be complex individuals with redeeming qualities and serious flaws. I just didn’t connect with or particularly like any of them. And without at least one person to root for, I kind of just wanted the book to be over.  I kept at it though because the actual death did intrigue me and I wanted to know whodunit – the last 20 pages were honestly my favorite. This book kept me guessing until the very end! So overall, I’d peg it as a middle-of-the-road murder mystery.

What have you been reading lately?