I am having a hard time wrapping my head around the fact that it is July already. March seemed to last 239 days, April was another long month of quarantine and monotonous days . . . and now suddenly it’s July. What in the world?

This month I finished five books (and there’s a bonus book that I forgot to review previously) and genres were all over the place – just the way I like it!

I feel like this month was split pretty evenly with books I really loved and books that were kind of a bummer. Let’s get into it!

99 Percent Mine by Sally Thorne

Darcy has inherited her grandmother’s house in a 50-50 split with her twin brother Jamie and she is determined to restore the home and make it shine. Heading up the renovation is Tom, Darcy and Jamie’s best friend from childhood who Darcy just so happens to be in love with. She’s always only had 1 percent of his heart, but now she’s going to do everything she can to claim the other 99%.

I read The Hating Game from this author back in December and really enjoyed it, so I was excited to check out another rom-com from her. I wanted to love this, but unfortunately it fell flat for me. The dynamics between the characters seemed really off and it was hard for me to connect with Darcy and Tom’s relationship. It felt forced, I did not understand the appeal, and I was confused at times by the Jamie-Darcy-Tom dynamics. And honestly, Darcy was just not a main character I enjoyed. She alternated between whiny and super aggressive and needy and it was just a lot to handle. I did like certain aspects of the book – the renovation plot line and pretty much anything with Darcy’s best friend Truly, and I think it was kind of hard not to love Tom – but it was not enough to love the book. This ended up being just an okay read for me.

The Friend Zone by Abby Jimenez

I actually read this book a few months ago, but when I went to write the review for its sequel this month, I realized that I somehow never reviewed this book! This is the problem with reading so many books on Kindle; I don’t have the physical book as a reminder to include it in my review and somehow this one slipped through the cracks. Whoops! Before I start this review, I do want to include a trigger warning for infertility. If this is a subject that is difficult for you, you may want to skip this one. Also, both books are pretty heavy on the language and there are a few steamy scenes (which you know are coming and can easily skip if you prefer) so keep that in mind if that’s not your cup of tea.

Kristen is a no-nonsense, highly sarcastic, witty and fun woman who has a lot going for her and one big thing working against her: she has health issues that have been causing some major problems and are likely leading to a life of infertility. As the festivities begin for her best friend Sloan’s upcoming wedding, she meets the best man Josh, who just so happens to check all the boxes of her dream guy. Their chemistry is undeniable, but Kristen refuses to allow a relationship to develop because Josh has made it no secret that he wants to have a huge family someday and she can’t bring herself to tell him that it isn’t in the cards for her. Okay. First of all, freaking Josh. He was a rockstar for me. Sweet, patient, earnest – he endeared himself to me and I loved the alternating perspectives so we could get his point of view too. I loved their dynamic and was rooting for them the whole time, but the book did get a little frustrating. I just wanted to shake Kristen so many times and say “JUST TELL HIM.” Like, so many things could have been solved with just a conversation. It had some heavy elements but this book was a fun, flirty rom com and I overall enjoyed it. I will say – I’m not sure how I feel about how the infertility was handled and I can see how this could be a really problematic plot line and conclusion for someone who struggles with this in real life, so please keep that in mind.

The Happy Ever After Playlist by Abby Jimenez

Okay! Back to The Happy Ever After Playlist. I didn’t realize until I went to write this review and saw an author note that this book was actually written first, and then The Friend Zone was written as a prequel to it. While both could be standalone books, I definitely recommend reading The Friend Zone first. In fact, if you haven’t read it yet, stop reading this review immediately, because there is about to be a major spoiler.

Two years after the tragic death of her fiance, Sloan is still entrenched in her grief and struggling to move on with her life, until one day a lost dog comes into her life and gives her purpose again. When she can’t get in touch with the owner, she adopts the dog as her own and starts to regain control on her life. That is, until the owner reaches out to her two weeks later. Jason is an up-and-coming musician who was touring in Australia; he’s coming home soon and wants his dog back. Texts turn into long phone calls and undeniable chemistry develops as the days count down to Sloan and Jason meeting in person. While I  liked The Friend Zone, I absolutely adored The Happy Ever Playlist. I loved that it had depth and Sloan and Jason dealt with real, actual struggles and problems as their relationship evolved. It’s fun, but far from fluffy. Their long-distance get to know you was just the cutest. Delightful, sweet, adorable, heartwarming, satisfying. You just want to cheer for each of them and honestly, I was swooning a little bit by the end. It’s just a super fun read and was perfect for vacation. I loved it!

One of Us is Next by Karen M. McManus

Back in November, I read the young adult novel One of Us is Lying and I loved it, so I was really excited for the sequel to come out. A year and a half after Bayview High was entrenched in scandal over the death of Simon Kelleher and his “About That” gossip app, a new copycat emerges. Only this time, it’s not an app, it’s a text-based game of Truth or Dare. Take the dare, or else a dark secret will be revealed about you to the whole school. Secrets are revealed, dares are taken, and soon, the game takes a deadly turn.

This book focuses on alternating points of view from main characters Maeve, Phoebe, and Knox and I loved getting to know them and their relationships with one another as they were each dragged into the game. There is also some crossover with characters from the first book which added a really fun element. I honestly felt like I knew everyone and I don’t know how the author can manage to make you love like 15 different people and want to just hang out with them all, but she does and it’s amazing. This book was an easy, quick read with an intriguing mystery. It’s bingey, interesting, and while I did guess some of the twists, there were still some surprises. I want to say that while this is a young adult novel, it’s definitely PG-13 with some sexual references and swearing, so be aware of that before recommending it to a young teen. You don’t have to read One of Us is Lying first, but there would be some small plot holes if you don’t, so I would encourage reading them in order. And I highly recommend you do –  I thoroughly enjoyed each book!

We Are All Completely Beside Ourselves by Karen Fowler

This book was recommended to me by a friend and I knew very little about it before diving into reading, which is definitely the way to go here. I would recommend reading this book with as little information about it as possible. The story follows Rosemary as she recounts her life story and the unraveling of her once close-knit family. And that’s all I’m going to say. 😉 There is a pretty big twist to the plot that I do not want to spoil, but I also am struggling a bit to explain my thoughts without addressing it or giving anything away. I will say that this was unlike any other book I’ve read and had a unique, thought-provoking plot that I wasn’t expecting. Poignant, heartfelt, complex, easy to read but really compelling. I think it would be an excellent candidate for an interesting book club discussion. Definitely recommend!

The Wives by Tarryn Fisher 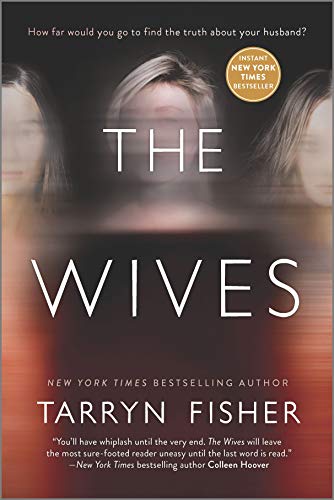 The narrator of this book presents herself as Thursday, because that is the day she gets to be with her husband. The rest of the week he splits time with his two other wives whom she has never met. This polygamous marriage isn’t what she hoped for, but she loves her husband so much that it’s worth it. Until one day, she discovers some information that leads her to one of the other wives, and it changes things irrevocably.

I think this is supposed to be in the psychological thriller category of books but truthfully it’s not very thrilling. There was never a point where my heart was pounding or I was jumpy or anything, and the few twists that were there felt disappointing and even ridiculous. It’s hard to even decide if I liked it. This book had elements of mystery and it was a good enough beach read thriller – not really too dark or twisty and easy to binge while lounging in the sun. I read it pretty compulsively, so I enjoyed it enough to want to find out what was going on. But I was also very aware of the fact that I felt underwhelmed by it for pretty much the whole second half of the book and I was definitely thrown by the ending – not in a good way. I would not recommend it if you’re wanting an edge-of-your-seat nail biting thriller (there are SO many other good thrillers with unreliable female narrators like Girl on a Train and A Woman in the Window), but if you’re in the mood for what I would call “psychological thriller lite,” than this is a decent option.

Now it’s nap time for my kids and I think the outdoors is calling me to go read a book on my porch swing. 😉 Do you like to read outside when the weather is nice?