Somehow, someway, this crazy year that is 2020 just keeps moving along and we’re onto another month and another book review!

I’ve been wanting to challenge myself with some harder, deeper books lately and this month I read some very compelling, meaningful books that I know will stick with me for a long, long time. Let’s dive in!

How to Be An Antiracist by Ibram X. Kendi

The only way to undo racism is to consistently identify and describe it – and then dismantle it.

I would have always said that I was “not racist.” I would have considered myself to be colorblind (“I don’t see color”). Reading this book gave me so much insight into that language though and I now realize that when I was “colorblind,” I really was just oblivious. I was ignorant. And while I may have been “not racist,” I was not actively antiracist. I read this book as part of a virtual book club and it is POWERFUL. It’s really hard for me to summarize because there is so much in this book worth mentioning. I am thankful that I bought my own copy because I was constantly underlining, starring, making notes. Kendi addresses racism in many different areas of society and how it affects everything from policy making to poverty to standardized testing to individual relationships and so much more. It touches on the history of race and racism both globally and in the United States and shines a light on how both systems and individuals play a part. There may be those that disagree with me, but I would say that this book mostly manages to stay apolitical. In addition to a tremendous amount of research noted in the back, Kendi uses examples, both good and bad, on both sides of the political spectrum and even takes a critical look at himself. He writes so vulnerably about the ways in which he has fallen short or needed to grow in his own journey to be antiracist and I feel like that makes it easier for the reader to look critically at him/herself. I had to take a lot of hard looks in the mirror as I read and I feel like this book stretched me and changed me in many ways. It gave me a new lens with which to view the world around me and identify areas for growth. Now for all my gushing, I will say that Kendi is one man. This is by no means the exclusive answer to all the problems within our society and there are many perspectives and platforms to consider. Even so, this is such a valuable resource and I absolutely recommend it to everyone as an incredibly important opportunity to read, reflect, and grow. It is challenging but ultimately I found it to be inspiring and hopeful. I think it is an excellent candidate for book club discussions, or even just reading with a friend to process together. Highly, highly recommend.

Such a Fun Age by Kiley Reid

Emira, a young black woman, is accused of kidnapping the girl she babysits while the two of them are in a grocery store. The entire confrontation, made by a white grocery shopper and the white security guard, is filmed and the story eventually gets back to Emira’s employer, Alix. Mortified by the situation, Alix tries to rectify the situation by befriending Emira – but is that really her place? And is she handling things as well as she thinks she is?

At first the style of writing felt disjointed to me, and it took me a while to establish a feel for it and get into the story, but once I did, I was hooked. I read this entire book in less than 24 hours! It was especially interesting to read this on the heels of How to Be An Antiracist – that book really did open my eyes to the ways in which so many well-intended “not-racist” behaviors are actually racist. Such a Fun Age was like a case study for exploring the dynamics of race, class, and privilege within relationships, both romantic and professional. The characters’ intentions didn’t always match the outcomes of their actions and it demonstrated the nuances in interactions and how things are rarely just black and white (no pun intended). When I tried coming up with a few adjectives for this book, intriguing, provocative, and engrossing immediately came to mind. I’m not sure if I would have felt this way had I not just read How to Be An Antiracist, (in fact, I know I would’ve viewed some of the interactions and characters differently beforehand!) so I would actually recommend reading both books if you can. But even if you can’t, this book is well worth a read. I think it would be an excellent candidate for a book club discussion on racial inequality and the white savior complex.

One in a Million by Lindsey Kelk 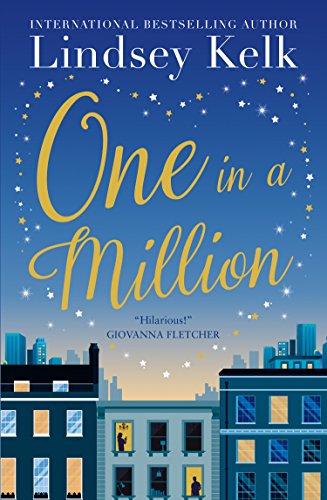 After several books on the heavier side, I was in the mood for something light and easy and this book seemed like just the thing. In an effort to save her small social media marketing business, Annie accepts a bet: a free month’s rent if she can make a total stranger Instagram famous in 30 days. The only problem is, the chosen target is Dr. Samuel Page, a dry historian with an overgrown beard, a flip phone, and absolutely no interest in social media. Annie is determined to win the bet, so she makes a deal with Sam. Allow her to open the Instagram account, and she will help him win his girlfriend back. Except it isn’t long before Annie realizes she doesn’t want Sam to win back his girlfriend…

I wanted so badly to like this little rom-com, but gosh I just did not. Honestly, I was bored! The pace is so slow and it is really long – I read it on my Kindle and remember looking for my percentage thinking “surely things are going to pick up soon” and I was shocked to see I wasn’t even 25% of the way through the book and it felt like nothing had happened. I also could not really get into the characters or understand Annie and Sam’s dynamic or growing relationship (and I wouldn’t even say that’s a spoiler, because this book is super obviously predictable). I think it was supposed to be endearing and sweet but I can’t really say there was ever a point where I felt super invested or interested in them. There were way too many underdeveloped side characters and stories (one side story seemed like it was going to be more of a thing which would have been interesting but then it just…wasn’t). As a whole, this book was fine if you want a feel-good, somewhat mindless beach read, but I found it to be pretty underwhelming and forgettable.

The Dearly Beloved by Cara Wall

Charles and James, two men from very different backgrounds, feel the same call to preaching and end up as co-pastors at a Presbyterian church in New York City in the 1960’s. Their wives come with them, although it soon becomes apparent that they could not be more different. Still, the foursome have a unique bond and navigate the ups and downs of their relationships and faith journeys over the years.

This book was recommended to me by a friend and I dove in without really knowing what to expect. While the book does technically cover multiple decades, it really focuses on their lives in college as Charles and James meet Lily and Nan and are led to divinity school and then the early years of their ministry. This is definitely a slow burn, character-driven story so don’t expect a fast paced plot, but it is really well written and ends up being very thought-provoking. I am a Christian and found it fascinating to think about what faith looks like to different people – how they think about God, how they feel in their callings, how they cope with suffering. I do not think you have to be religious to appreciate this book. There also ended up being a pretty large part of the plot that I didn’t see coming but was super interested in given a specific part of my background (I don’t want to say too much more for fear of spoiling things). I felt like I could relate to each character in a unique way and felt drawn to them all for different reasons. This novel is compelling and moving and rich – definitely recommend.

Whew! What a month, huh? I know I’m going to continue processing many of these books for a while. At the same time, I currently have NINE books stacked up on my nightstand waiting to be read so I’m going to be processing these and taking in some more in August. 🙂 What have you been reading lately?