This is getting just a bit ridiculous.

I guess the good thing about not being on vacation in Florida this week (if there is such a thing) is that I’ve been catching up on all of the things I have wanted to do for a while but haven’t had a chance to. My to-do list has gotten much shorter and it’s awesome!!

One of the things I checked off my list was to try out a new glitter nail polish that I got in my latest Birchbox.

I was initially a little skeptical of the glitter aspect of this duo because my experience with glitter has never been good. It just always seems to get everywhere! But I decided to give it a shot and try Nail Rock anyways.

The first step involved painting two coats of what looked like a pale pink polish on. Once applied, I couldn’t have even told you the polish was pink. It was so sheer that it hardly colored my nail at all. I was a bit disappointed, because I had initially planned on just putting glitter on my ring finger nails. Once I saw how sheer the pink was, I decided to just go ahead and put glitter on all my nails.

Step two was dipping my nails in the pot of glitter and pressing the glitter in. I then had to let them dry for 15-20 minutes.

This step was MESSY.  Glitter lived up to its reputation for me because it got everywhere. I even put a paper towel down so I wouldn’t touch anything but it still managed to get on my face, clothes, the couch, you name it. Yikes! 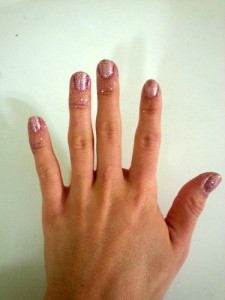 After waiting 20 minutes, I washed my hands and most of the glitter came off of my fingers. I immediately put a layer of topcoat on over my fingernails to seal in the glitter.

I have to admit, I liked the way they turned out but I’m not sure the process and mess was worth it. I might try it again for a special event, but for a day-to-day basis I’ll stick to plain old regular nail polish.

Sorry for two nail polish-related blog posts this week – – this is what happens when I’m snowed in for so long!