Well, it’s official: I have a two-year-old!

LJ’s actual birthday was Friday so we had a little mini celebration as a family. After Justin got off work, we went to Culver’s for a little family date. LJ received a few birthday cards in the mail from family so we let him open those one at a time throughout the dinner. (Sorry for the terrible photo quality! I was actually videoing him opening everything so these are just screen grabs from the videos).

My grandparents always send some dimes for his piggy bank – so sweet! 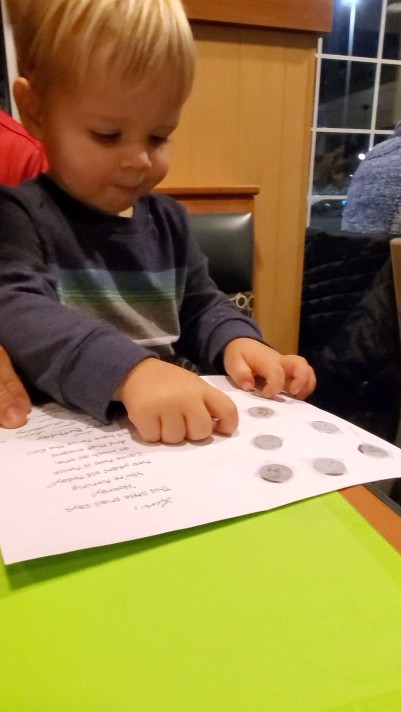 We also got a book for him so that he would have a little present to open during the birthday meal. He loves trains and lift-the-flap books so when I saw this during a friend’s recent book party, I knew it was the perfect choice. 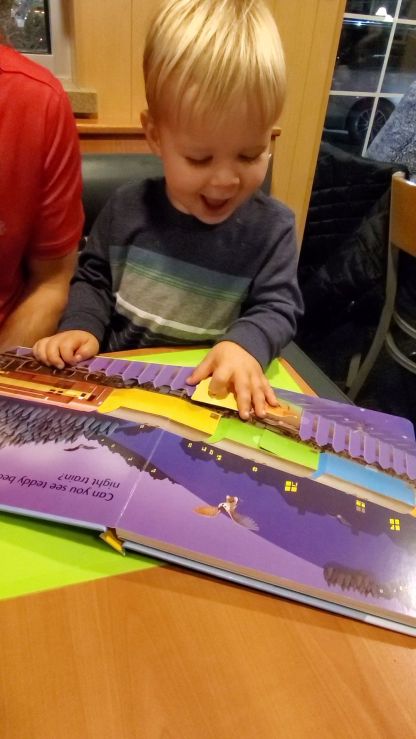 After finishing our meals we each got an ice cream for dessert. LJ usually just shares his dessert with one of us so the fact that he got his own cup of ice cream with sprinkles was a big deal for him. He was so excited and definitely enjoyed it! 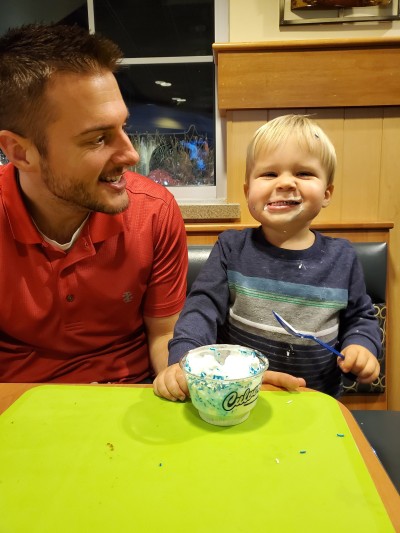 Instead of a bunch of gifts, Justin and I decided to get one big gift that he would really love: a train table! We received a hand-me-down table from a friend and saved it until Saturday morning. Justin woke up early and got it all set up so it was ready to go when LJ woke up. He was SO excited to see it in his playroom and played with it all day! 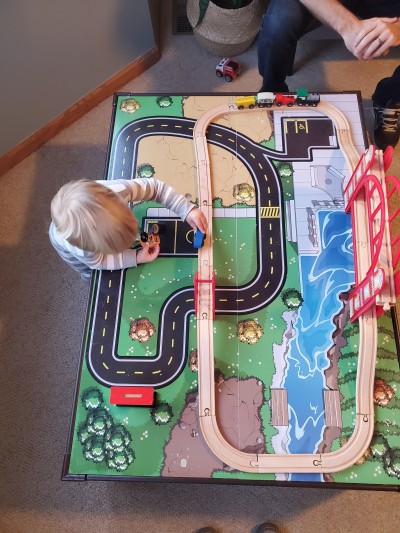 On Saturday after LJ’s nap, some of our family came over for his little party.  I stuck with the train theme and just grabbed a bunch of things around the house to decorate. I bought a “happy birthday” sign from the dollar spot at Target back when I was teaching and it gets brought out for every party. I re-used the train and conductor’s hat from LJ’s Halloween costume, grabbed some books and trains we already had, pulled out my white serving dishes and letterboard and voila!

My friend Amber made some amazing train cookies and I bought a little 4 inch cake from a local grocery store to put candles in. We served super fancy cuisine – Papa John’s pizza, chips, and a veggie tray. LJ loved it! 🙂

Now unfortunately, once the party actually started, I was so absorbed in it that I lost track of my phone and didn’t take pictures! Justin snapped a few, but overall, we were all just enjoying ourselves without phones.

Justin and I made the decision a few months ago to have a “no gifts” party for LJ. We did this last year and wanted to do it again this year. We agreed that not only is LJ still too little to really understand gifts are typically given on birthdays, but his birthday is super close to the holidays and he will be receiving a lot of things then. Also, we are minimal-ish people: we’re not trying to live with 5 things or be super controlling and never accept more items, but our home is a more pleasant place and our lives are more enjoyable when we’re not overrun with stuff so we’re intentional about what comes into our house.  Because we still wanted family to be involved and participate in his gift, I bought unpainted trains and asked our family members to decorate a car instead of giving a gift. Some did their own, some couples shared one. We painted trains during the party and those that couldn’t make the party had theirs made and sent to us ahead of time. 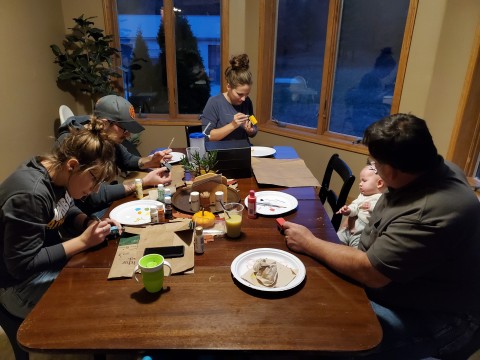 This idea worked SO well and it was so fun to see the creativity (check out my brother-in-law’s “hippopotamoose-caboose” ha)! They were all so unique and reflected everyone’s personality. LJ loves them and it’s sweet to see him play with all of them.

Happy birthday, my sweet LJ! It was such a joy to celebrate your life (and bribe you with one more cookie before bedtime when I realized I hadn’t gotten a picture with you – haha!)

It doesn’t seem possible, but I now have a one-year-old.

I can’t believe LJ’s first birthday has come and gone. It seems like it wasn’t that long ago that I had the sweetest little newborn snuggled up on my chest. At the same time, it’s so hard to remember what life was like before him. He has changed our whole world and we’re so grateful for this year of his life!

Justin and I decided a long time ago that we wanted to keep LJ’s birthday party very low-key and simple. We know some parents choose to go all out with themes, decorations, coordinating food items, etc. and if that’s your thing, that’s great and we totally support you!  For us, we decided we wanted to focus on finding a few small ways to have a special celebration without a ton of work or stress. Today I wanted to share what we did to keep things sweet, simple, and fun!

Our situation was a little unique in that LJ’s birthday fell on Thanksgiving this year and we were going to spend the day at my grandparents house with extended family on my dad’s side celebrating both Thanksgiving and Christmas. Instead of having a separate party on another day, we just decided to have a small celebration after the Thanksgiving meal but before the Christmas gifts. We called it ThanksBirthMas. 😉

After people were mostly finished with the meal, I set out a small dessert station on my grandma’s kitchen island.

I had purchased cupcakes in three flavors from a local baker (chocolate with peanut butter frosting, vanilla with buttercream frosting, and blueberry with cream cheese frosting) and I set out a few toppings people could sprinkle on top if they wanted. I already had the cake stand and three dish serving set so I just brought those along to have a cute little way to arrange the items. I also set out my Letterfolk board to round out the display.

Our baker had also made a smash cake for LJ based off a picture I found of a cake I liked on Pinterest and I stuck a “1” candle on top. I also attached a gold “1” balloon to LJ’s high chair.

I passed out party hats to everyone as a fun way to say “okay, it’s birthday time now!” 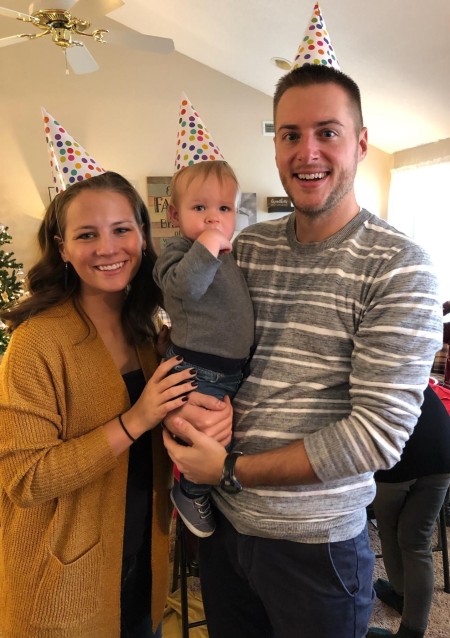 We all sang Happy Birthday to LJ and ate cupcakes while he dug into his smash cake. His cake was vanilla with peanut butter filling and he loved it! 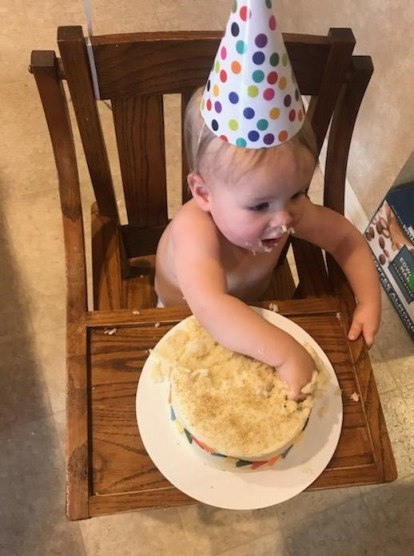 He was upset when we decided he had eaten enough and took it away. I think he takes after his mama’s sweet tooth!

Justin and I had decided we wanted a “no gifts” party and had let our family know this desire a few months ago so everyone was on the same page. In lieu of gifts, we asked people to bring a donation to a local charity. We chose a local organization that distributes books to hospitalized children throughout our region. This organization is near and dear to our hearts because LJ had to spend a week in the NICU after birth and he received three books from them during his time there. We so appreciated this kindness during a very stressful time in our lives and wanted to pay it forward to other families.

Our families were totally on board with this and were more than happy to bring donations instead of gifts. Some people chose to wrap the books and LJ had fun tearing off the paper and opening his birthday cards. We were thrilled to get to make a donation to a great organization in LJ’s honor. 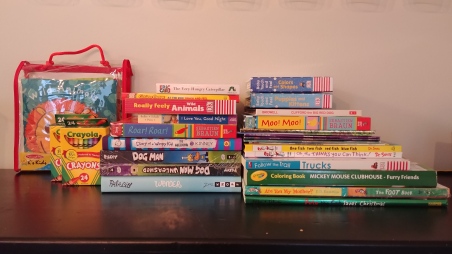 Once we had collected the books and LJ had opened his cards, we thanked everyone and the birthday portion of the day was finished.

Justin and I were very happy with how the party turned out. It wasn’t perfect or Pinterest-worthy. It was simple but still felt very special and celebratory. Even if we wouldn’t have had a combo Thanksgiving/Christmas on the same day, I doubt we would have done much more with the party. The point for us was to hang out with family and celebrate and we have lots of wonderful memories of our time together!

And just for a little walk down memory lane…

Happy birthday my sweet little LJ! We love you SO much!

This new planter brings a fun pineapple vibe to the playroom and I'm not mad about it. 🍍
March Book Review!
Bye-bye brown kitchen! 👋
Justin noticed a deer antler by the side of the road on his recent bike ride and I may or may not (but definitely did 😅) have had him drive back to the spot and get it for his office bookshelf. It was just the missing piece that this shelf needed!
One year and a pandemic in between these pictures 👉
A flash makeover for Justin's office happened yesterday and a couple hours made a BIG dofference! 👉
Follow simplify the chaos on WordPress.com