This weekend, Justin and I had visitors! One of Justin’s best friends from childhood, Caitlin, came to visit us and she brought her boyfriend Ryan. Justin and I both feel like we have been traveling a lot lately so it was nice to get to stay put for a weekend and have people come to us!

Caitlin and Ryan are both active, outdoorsy people like Justin and I so we took advantage of a beautiful (albeit chilly) Saturday to go for a bike ride! 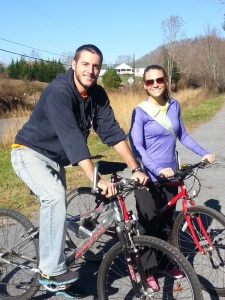 We chose a trail that follows a local river. The river was so calm and still that the golden leaves of the trees reflected clearly off the surface. It was such a fun ride!

Justin and I had to borrow bikes from some friends since we don’t have our own.

We started out really positive and excited but by the end, our butts were HURTING. Our friends are about the same size as us but the bikes weren’t quite adjusted right for us and the seats were not padded at all. By the end of our 7+ mile ride, we were both very sore! We still had a ton of fun though.

We took a break at the halfway point of our ride for a photo shoot. There was a cute little bridge there for us to prop up our camera on and take some pics.

Ever had one of these self-timed jumping picture fails? We had several! They were all pretty hilarious to look back through though.

Success!! What a great weekend with some awesome friends!

We had such a busy weekend that I was exhausted last night. I got to bed early and woke up feeling refreshed! I chose bright, refreshing colors for today’s outfit.