Week Four was a bit of a beast in our basement kitchen renovation. 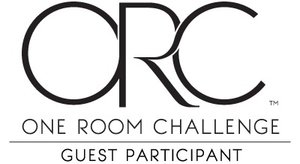 On the positive side, I was able to get the walls painted. I chose Sherwin Williams Alabaster in Eggshell, the same paint that we used in our guest bedroom, and it makes the room look so much better! Unfortunately, that was about the only thing that got fully completed due to some fairly major snags we hit.

Over the weekend, we started working on the counter tops. My plan was to take off the counter top on the peninsula part of the cabinets and replace it with butcher block. It’s a bigger job so Justin was willing to help me and it went much quicker with two people addressing it!

I’ve never really thought about how laminate counter tops are installed before, but it turns out they are fairly easy to remove. The counters were screwed directly into the cabinet, and then there were two angled ledges connecting the narrow counter on the side to the wall that were screwed into the wall through a piece of paneling. We just used a small rechargable screwdriver (without a doubt our most frequently used tool for small home projects!) and got everything unscrewed. 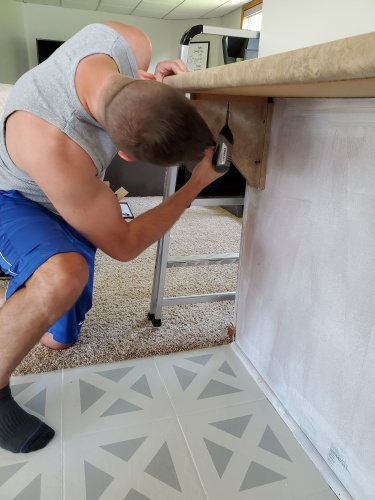 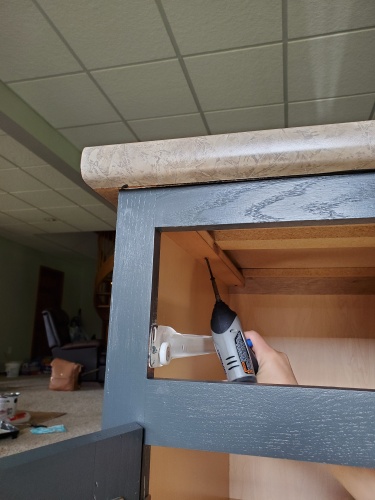 Justin took a razor blade and ran it along the wall to peel off the caulk that sealed the counter to the wall. After that, it was just a matter of lifting the counter off! This was the easy part of the day. 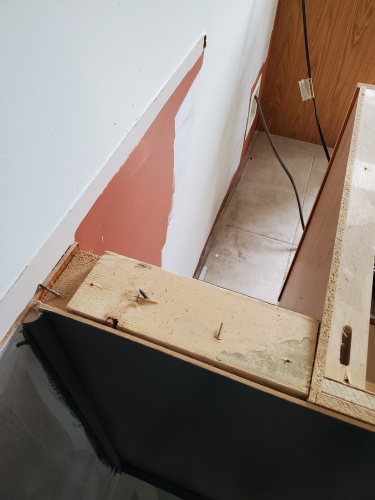 As you can see from the above picture, there is empty space between the cabinet and the wall. The previous owners just used a piece of paneling on the front of the cabinet to make this peninsula longer, so we decided to remove that frame and move the base cabinet a little closer to the wall so the counter top would be long enough. We won’t miss the lost inch of counter space and it will make things much easier and cheaper than buying a custom made top. 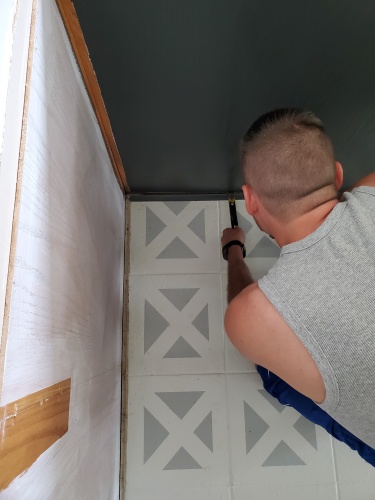 We set off to remove the front of the cabinet’s paneling and quarter round trim. This would have needed to be done anyways because the top of the paneling got damaged in removing the cabinet – not a big deal since it’s inexpensive and easy to replace. The quarter round came off fairly easily with a crowbar. The paneling was a bear to remove because not only was it nailed to the cabinet but it was also glued and they used tons of glue! It was a frustrating and slow process but we finally got it all removed and also removed the wooden frame they had created between the wall and cabinet.

As we were doing this, I started thinking about possibly adding a thin sheet of beadboard paneling to the wall so we wouldn’t have to move the cabinet. The vertical lines would add visual interest and give us the extra space we need for the counter to at least go past the edge of the cabinet (without much overhang, but I can live with that). We also assumed that the paneling still on the wall (previously under the extra counter) was glued down and would cause some damage in removing. Beadboard might solve both problems: cover the damaged wall and make the counter tops long enough to cover the cabinets. We started to remove the paneling.

This is when things took a huge downturn.

Our assumption that the paneling was glued was correct, but it was way worse than we imagined. They used so much glue that the walls were very seriously damaged when we tried to rip it off. Huge chunks came out! And not only that, but we hit the dreaded four-letter “m” word: MOLD. 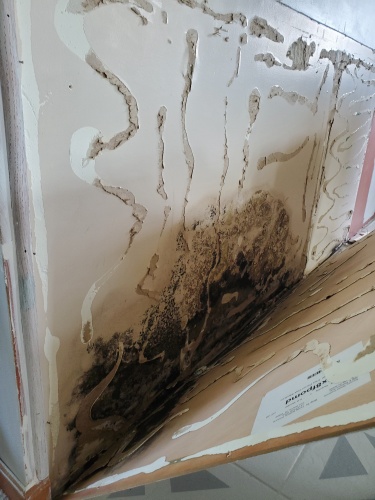 We immediately knew that we had to pause this project and get a professional in here. We are not equipped to handle removing mold and replacing drywall and we want to make sure it is done right. We already have a call in to a professional and are waiting to hear back on a quote from him. Until then, this part of the project is on hold.

This is definitely not the news we wanted, nor is it the progress point we wanted to be at right now. It’s discouraging and affects our timeline, but this is just the reality of renovating. We’re hopeful that we can get the drywall guy in sometime this next week to address this situation but until then, we just have to hold off on the kitchen. We spent the rest of the weekend relaxing as a family, although I did start shopping my house to test out some decor pieces for the space. If you caught my Instagram stories, you know I spent time restoring this thrifted copper planter to it’s former glory. It’s going to be a great decorative addition to the kitchen!

While my project is on pause, I’m going to enjoy browsing the progress that other people are making on their rooms. The fun part about the One Room Challenge is so many people join and are trying to finish their own rooms – it’s so fun to watch the progress and cheer others on in their own projects. You can check out all the other rooms here. Hopefully I’ll have good news to report next week and be able to get back to work!