Over the weekend, Justin and I teamed up to finish a big project in the basement kitchen: our new butcher block counter top!

And because I’m a sucker for a good before-and-after, here’s a refresher on what this looked like before we started:

My parents took LJ for the weekend so we had lots of time to work on this project. If you caught my Week Four Renovation Update, you know that actually removing the old counters was pretty easy but we then realized the cabinets were not installed square to the wall. That would have been okay, except the pre-made counter top we bought was not quite long enough to reach one corner of the cabinet since it was angled further away from the wall. This meant we were going to have to move the old cabinets closer to the wall.

To provide more counter space, the previous owners had used a panel in front of the cabinet to make the base seem larger. We wanted to keep as much counter space as possible, so we decided to only move the cabinet enough for the counter to reach the end with a little overhang. Once we finally got the cabinet off and out of the way, Justin used an angle grinder to cut away about 1/2 inch of tile on the floor. He also sealed up the cracks that were in the concrete underneath using a silicone caulk.

The previous owners had screwed a board directly into the concrete and then screwed the cabinet to that board to keep things super sturdy. Instead of drilling into the concrete, Justin used epoxy through the drill holes to fasten the board back to the concrete.

This worked really well and provided a very sturdy place to attach the base cabinet. Once it was dry, we set the cabinet back on top and Justin screwed the cabinet into the board from the side of the cabinet.

Since the cabinet didn’t actually touch the wall, we also created a small frame to connect the cabinet to the wall and provide sturdiness on the other side.

Justin used a circular saw to cut a thin plywood panel for the front of the cabinet and attached it to the cabinets using small brad nails.

Then it was time to finally place the counter top! We bought this one from Menard’s – we wanted the widest one because we plan to have stools for seating and treat it like an island. This was the perfect size! Justin first pre-drilled holes into the cabinet itself to make it a little easier to attach once it was on.

We set it on top and got it exactly where we wanted it, then Justin screwed the counter top directly in to the cabinet. While he did that, I painted the front panel the same color as the rest of the cabinets – HGTV Home by Sherwin Williams Rock Bottom in Satin.

Once the counter top was on and the panel was painted, Justin got to work adding the baseboards and quarter round and I worked on sealing the counter. I wanted a really natural looking finish and decided against staining the wood first. To seal the counters, I chose a simple method with a tung oil finish. This is actually a product we’ve had for several years and since buying it, the brand has moved to Miniwax.

After wiping down the counter with tack cloth, I used a clean cloth to apply the tung oil and rubbed it in using a circular motion. I let the first coat dry overnight, then ‘sanded’ it using super fine steel wool. I used the tack cloth to pick up all the steel wool shavings, and then repeated the process two more times. After three coats total, the counters have a gorgeous finish!

There are a lot of different methods out there for sealing butcher block counter tops and I’m sure there are better ways to increase durability. This is not our main kitchen so these counters will not be subject to the daily grind of 3 meals a day and will instead get used when we have larger gatherings or host visitors. Because of this, I wasn’t super concerned with getting the absolute best and most durable option for sealing. I anticipate a few nicks and scratches over the years but 1) I actually like the character that brings and 2) if it doesn’t look good, the beauty of butcher block is we can sand them down and refinish them later! In our first house after getting married, our kitchen didn’t have much counter space so Justin made me a wooden island and this is the sealing process we used – it held up well through lots of baking adventures and food prep so I’m feeling confident that it will work for this counter too but again, if not, we can sand it down and try something else later. 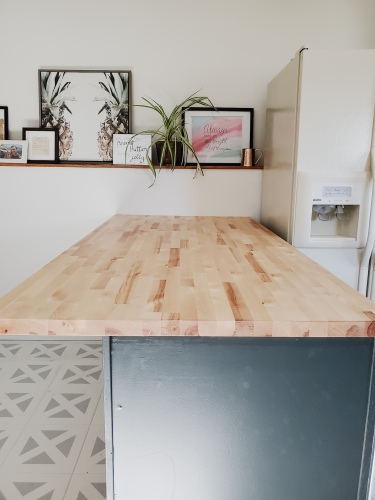 As for the rest of the counters, they have been one big question mark this whole project. I’m really trying to keep this renovation budget-friendly, so stone is out of the question. I’ve been debating painting the existing counters, replacing with another budget-friendly laminate, or continuing the butcher block look. Even though I’m doing this kitchen for the One Room Challenge and that ends in less than 2 weeks, I didn’t want to rush this decision. I like a good mood board or Pinterest inspiration, but I always prefer to just be in a space and get a true feel for what I want. I almost always regret making a decision  and buying something too early in the process, so I like to make decision as the space comes together. This makes for a slower, but more intentional renovation. 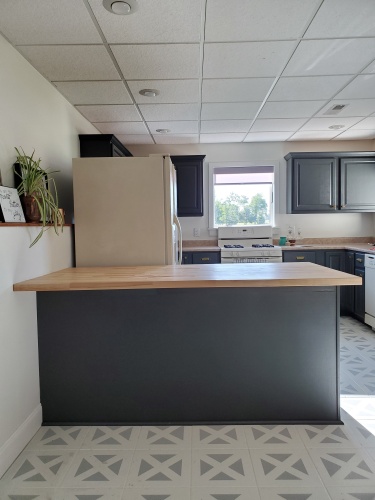 I wanted to wait until the butcher block counter was installed to get a feel for what I wanted for the other counters. Once this butcher block was in place, I immediately knew I did not want to continue the butcher block with the rest. I love it as a kind of accent “island!” This leaves painting or replacing with another laminate. Because of COVID-19, everything is delayed. The paint kit I want takes at least 2 weeks to arrive and the laminate estimate is taking a couple weeks to come back (and then would take 4-5 weeks to be fabricated and ready). I found myself initially wanting to rush the process and make a decision for the sake of the ORC timeline, but honestly, that’s not the most important thing right now. I want to love the final result and if that means waiting a little longer to get it right, so be it. So for now, I’m going to wait for the laminate estimate and continue to just spend time in the space and hone my vision for it.

I still need to run a line of clear silicone caulk around the edge of the counter by the wall, which I plan to do during nap time today, and then it will be 100% finished. After that I’ll probably spend the rest of nap time just staring at it – haha! Seriously though, it’s just so beautiful and I love when my vision for a space comes together just like I imagined! ❤