The guest room is getting so close to being finished!

Truthfully, I had expected that we would be totally done with the project by now. We started the project in the last week of October and the estimated project length was roughly 4-5 weeks.

When the old shower was ripped out during the demolition stage, we realized there was plenty of unusable space behind the wall and decided to expand the shower and add a bench. This addition made our project timeline more like 6 weeks. So we hoped to be finished right around mid-December.

1 – Add a shelf board to the top of the half walls in each room. 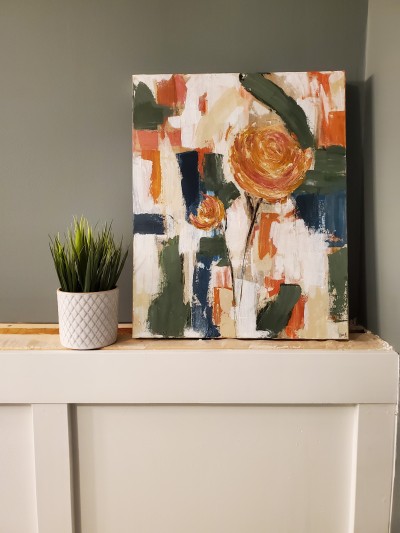 Since these are basement rooms, we have a half wall of concrete foundation that juts into them. I’ve made this into a kind of accent piece by adding board and batten to the front of each wall, but we still need to finish it off with a stained board on top. It’ll create a nice shelf for guests to use when finished! We planned to use the same boards that were originally there to save some money, but we realized that the board and batten made the wall wider than the original shelf. Justin just picked up new boards this week, so our weekend goal is to get them cut, sanded, stained, and ready to install!

2 – Close off the former TV nook built-in with doors to make it a linen closet. 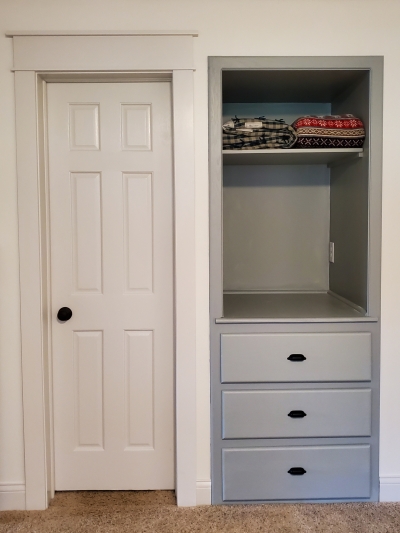 The previous homeowners had a TV in their built-in cabinet, but since the space is boxy and doesn’t fit modern TV screen sizes well, we are closing it off with new doors and turning it into storage for extra blankets, pillows, towels, etc. for guest use. Our contractor is finishing up our doors this week (the only reason this got delayed was because of the holidays) and will be installing them Saturday!

This vanity has been a source of frustration for a while. We originally hoped to replace the entire thing. I really wanted a floating vanity, but in order to do that we would’ve had to totally rework the plumbing and dig out a bunch of concrete. It would’ve added a lot of cost to the project and we decided we would rather put the money towards making the shower bigger and more functional than just getting a different style vanity with essentially the same function. Now that the shower is finished, I think that decision was definitely the right one! Here’s a sneak peek: 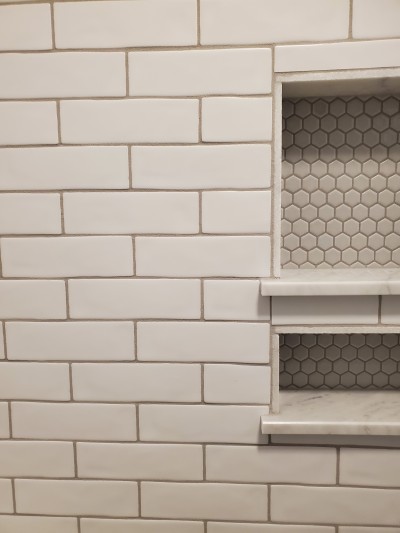 Unfortunately, the nook for the vanity space is a little awkward. It’s 39″ wide in the front and 38 1/2″ wide in the back. Standard vanities either leave too much of a gap on the sides for things to fall down or are too big for the space. A fully custom vanity wasn’t in the budget, so we decided to add a piece of wood on the sides of the old vanity to make it flush with the wall, paint it and add new hardware, and order a custom counter top. I contacted a company with great reviews to help us out. They came out and did measurements and were going to get back to me within 2 weeks. After hearing nothing for 3 weeks, I reached out and the woman explained that she had a death in the family and wasn’t expecting to have so much time out of the office around Thanksgiving but should have the estimates soon. Totally understandable. So I waited. And waited. And reached out 2 weeks later . . . and have heard nothing since. It’s been seven weeks since they came out to measure but they’ve essentially ghosted me. I’ve had to start over at square one which is extremely frustrating. I just went to another company’s showroom yesterday, and have another one to reach out to today. Hopefully we’ll be able to make some decisions and get a pretty quick turnaround because that’s really the last thing needed to make the bathroom fully functional!

Other than that, I’m just figuring out final details like hanging artwork and installing towel hooks. Our window treatments get installed next Wednesday and we have guests coming Thursday (they’ll have to use the sink in the basement kitchen outside the guest room since that won’t be finished yet). I cannot wait to share the finished space soon!