For as much as I love DIY, sewing is one skill I haven’t grown to love that much. I do love the look of curtains though, and they rarely come in the correct length for what I need. When I bought the 96″ curtains for our primary bedroom, I knew I would need to hem them. I like a slight pool of fabric at the bottom, but these curtains were still a couple inches too long for my taste. Today I thought I’d share a little tutorial for my method for hemming curtains – no needle and thread in sight.

This no-hem method is a low-cost, quick, and simple project that is perfect for beginner DIYs!

-Paper clips (or pin of your choice)

-Ironing Board (or other heat-safe surface)

Ideally you would use an ironing board but I didn’t have one so I improvised with two folding chairs and an old table protector pad. Before beginning, I recommend cutting off the curtain tag at the bottom (if there is one). I found that the hem tape did not adhere as well to the tag. Once the tags were removed, I folded the bottom of the curtain to create the new desired length.

For me, this was easy because the width of the existing hem was the amount that I wanted taken off overall length, so I could just fold the curtain over on the existing hem. I chose to secure them with paper clips because they’re easy for me to slip on and off and safer than sharp pins if I accidentally dropped or lost one and a child or pet found it.

Once I had secured the entire bottom of the curtain, I ran the iron lightly over of the new folded seam to create a nice crisp seam on the bottom.

Next came the hem tape. At first I accidentally bought super weight (it’s supposed to be for heavier fabrics) but it worked fine for my cotton curtains. I did run out and have to buy a second roll so I bought regular weight that time and honestly didn’t notice a difference in how they worked for my fabric.

I chose to work in smaller sections and ripped off roughly 8-10 inches of hem tape at a time. I placed it underneath the folded fabric and ran the iron across to activate the adhesive. (Note: the curtain edge is peeled back in the picture below to show you where I placed the tape, but make sure it is lying completely flat when you run the iron across)

I found that it worked best to hold the iron over each section for a good five seconds before moving it down the line, and I overlapped the iron each time for additional heat. If I spent less time on each section, the adhesive didn’t get hot enough to work. My iron was on the cotton heat setting since the curtains were cotton.

When I came to the end of the curtain, in addition to the hem tape running parallel to the old hem, I ran a small piece of hem tape along the outside edge to keep the fold secure.

To finish the seam, I flipped the curtain over and ran the iron once more over the hem tape from the other side, spending about 1-2 seconds on each small section.

That’s it! Once the fabric cools down, the glue dries and creates a nice new hem. This project cost less than $8 and took roughly 10 minutes per curtain. Quick, easy, and inexpensive! The perfect little DIY 🙂

Curtains (out of stock – similar here)

With all this extra time at home, I’ve been itching for a home project to focus on. I didn’t want a huge renovation project right now, just something to stay busy and distract myself from all the stress and anxiety going on. After talking with Justin about a few smaller project options, I settled on sprucing up the basement, particularly the TV/den area.

Here’s where we started: 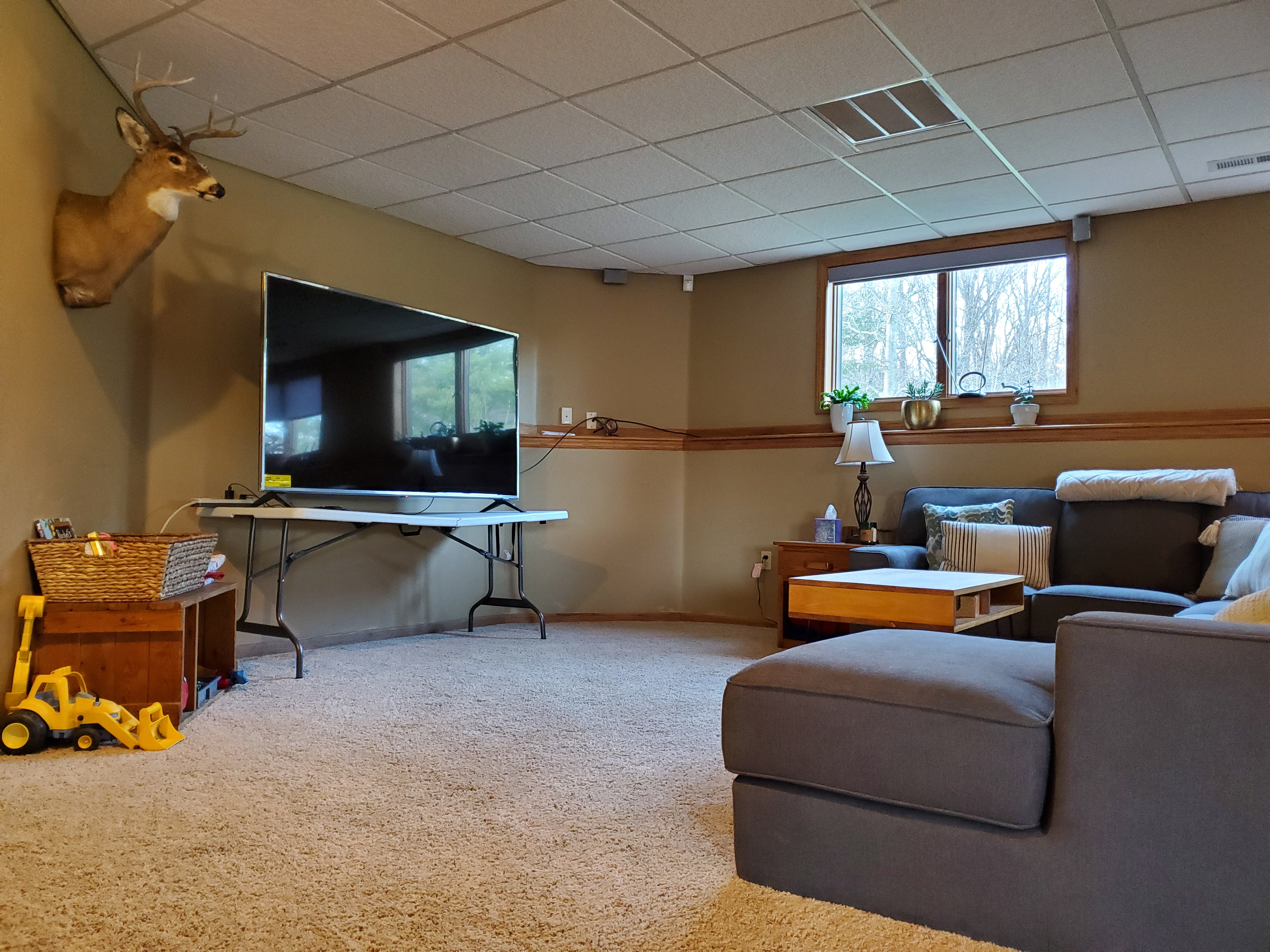 Our basement was one of the big selling points of the house when we first bought it: I think it was built with the idea of being an in-law living area because in addition to having the guest bedroom and bathroom, it also has a large multipurpose space with a full kitchen. It has great potential and we see this as a perfect space for entertaining and a great recreation space for our family as our kids get older, but it was painted brown and just seemed a bit dingy and dated. Since moving in, we haven’t really focused on it very much other than to put in some furniture and other random things that didn’t go anywhere else (like our treadmill ha!) or to store piles of things I’m decluttering.  Now that the guest suite renovation is finished, I wanted to focus on freshening up the rest of the level. 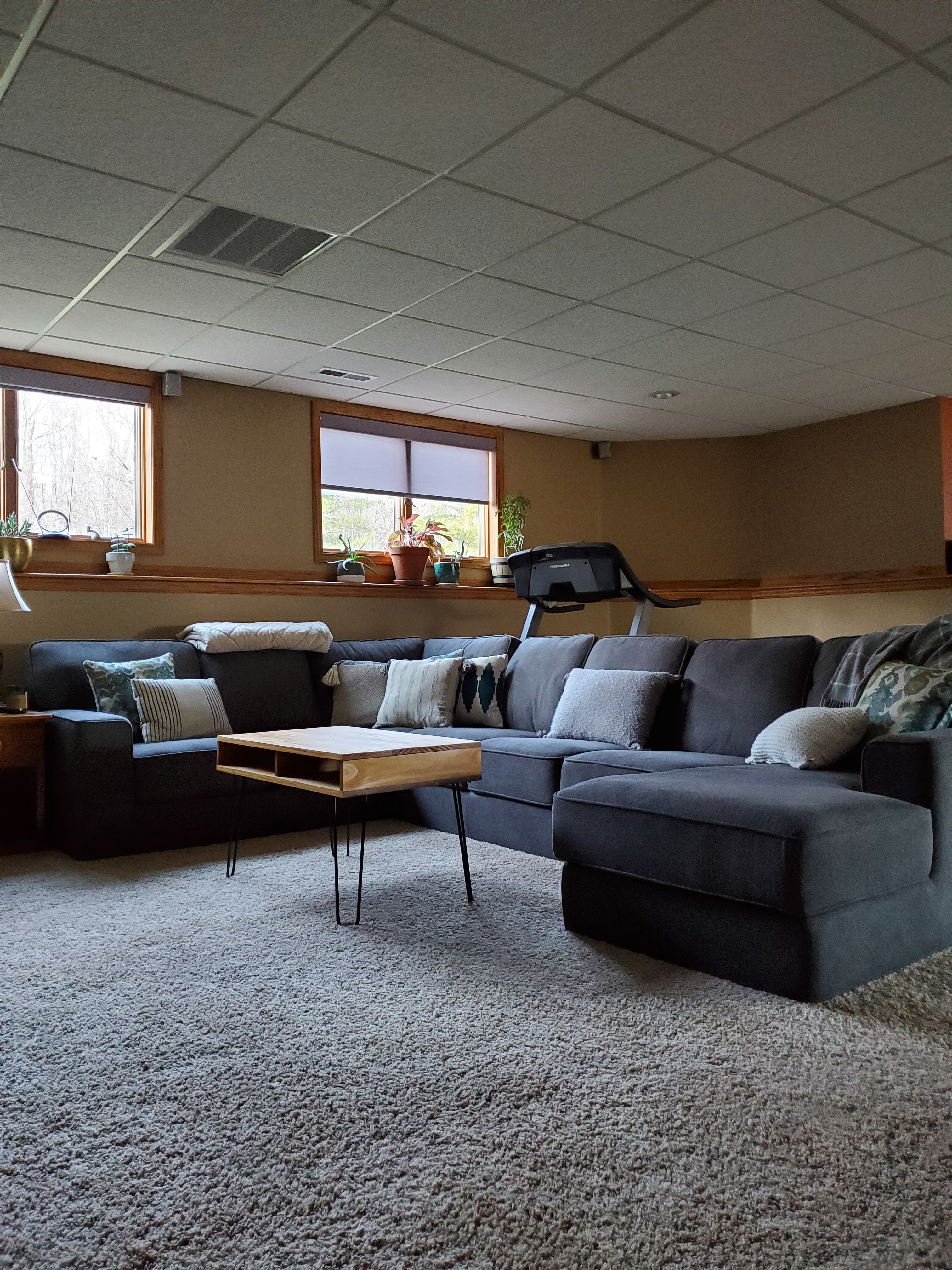 We didn’t have the budget to do much and social distancing prevented me from going out and getting a ton of things anyways, but I knew that a fresh coat of paint could work wonders. I settled on Sherwin Williams Repose Gray because I painted the guest bedroom trim this color (tinted at 75%) so I knew it would tie the two spaces together and it’s a nice versatile greige (gray+beige) that works really well in an open-concept space. Justin tucked up all the surround sound speakers into the ceiling for now (we aren’t currently using them but might someday) and I got to work!

All I planned to do for now was paint; however, once I started priming the walls and reached the half-wall where our foundation lies, I knew I wanted to also do a small update here too. I actually don’t mind the wall itself and actually like having a ledge to put plants, artwork, etc. What I minded was the dated trim on either side of the ledge – I wanted a simple, clean look and decided to try to remove the trim.

I recruited Justin’s help, and he used a small crowbar to pry off the old trim. 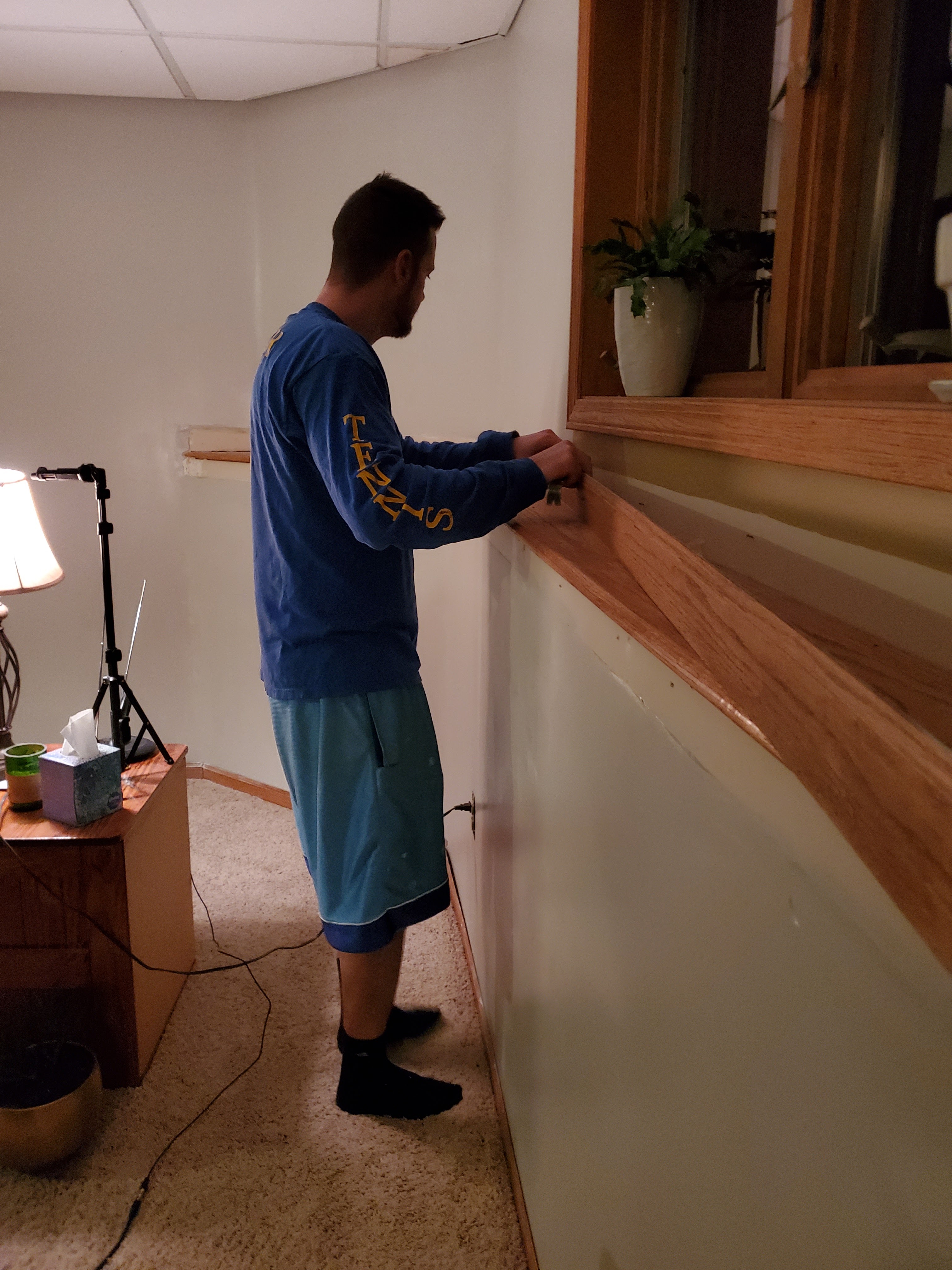 The wall behind the trim wasn’t in great shape. In many places, there were large gaps between the walls and the board on top of the ledge. We didn’t want to replace the ledge board (because, $$$!) but I believed we could get creative and work with what we had.

First up, Justin took plasting patcher we already had and patched as much of the wall as he could. He used a putty knife to smooth down the plaster and let it dry overnight. There were a few areas where the wall was so bad that he needed to patch a few layers. Once everything was dry the following day, he took a sanding block and sanded all the areas smooth.

The pictures above are just one small portion of the wall, but we did this for the whole length of the wall.

There were still gaps between the wall and the board. I knew I could caulk them, but some of the gaps were really big and I didn’t want to waste a ton of caulk. I bought this caulk backer rope and it was the perfect solution! It filled in the gaps and allowed me to just caulk over top. I just squished the rope in there and cut it to the correct length with scissors. In some areas, I had to use 2-3 layers of rope because the gap was so deep – imagine how much caulk that would take! This was a really great way to save a ton of time and money. 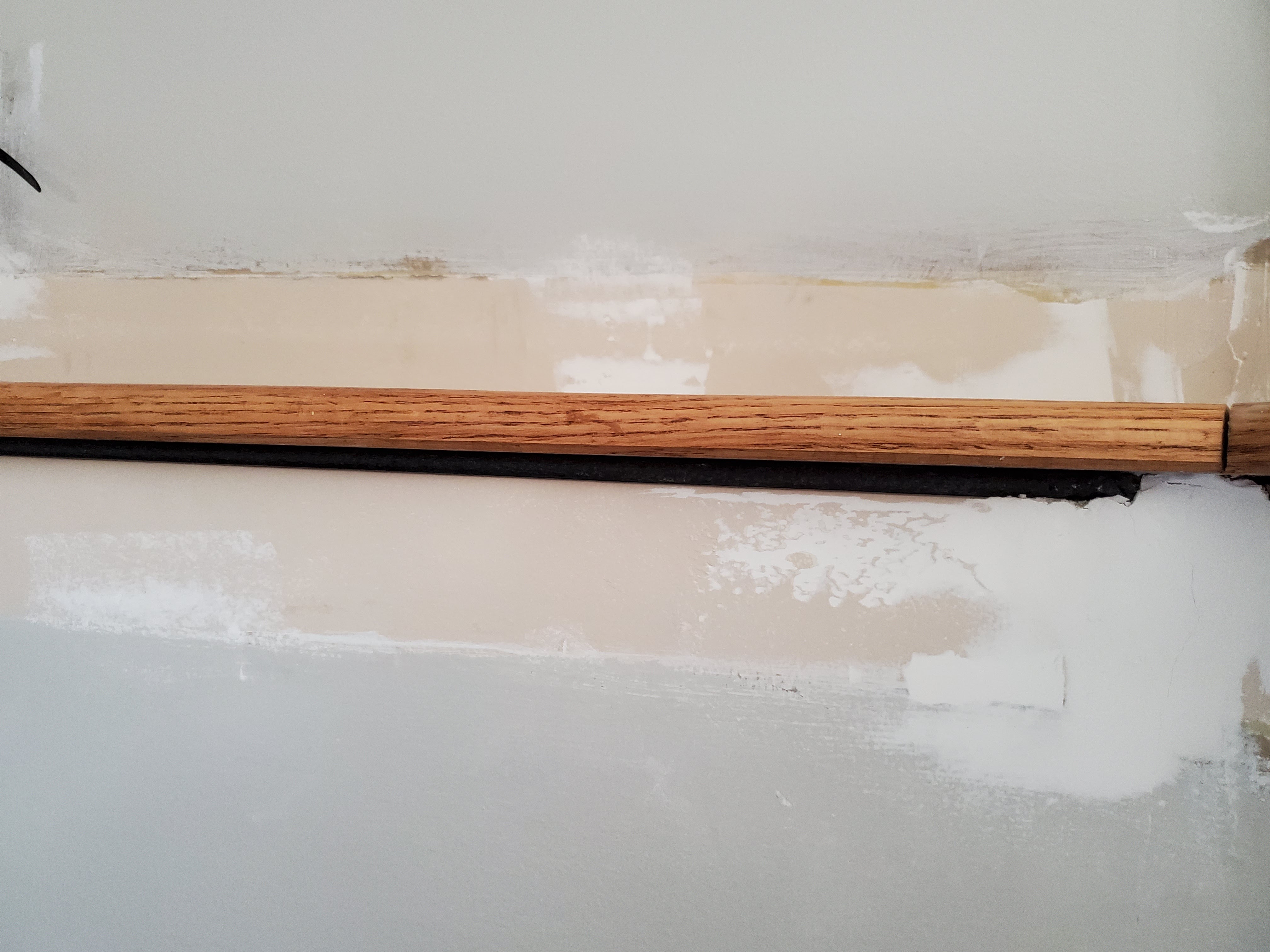 I used the filler in all the gaps on both edges of the board and then caulked over it with a paintable silicone caulk. We already had the caulk gun and one tube of caulk, but I did end up needing to buy one more tube of caulk because the other one was already halfway used up. I gently smoothed over the caulk with a wet paper towel to ensure it had a nice, even finish. 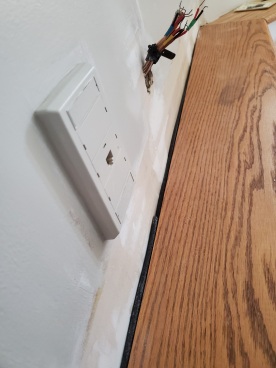 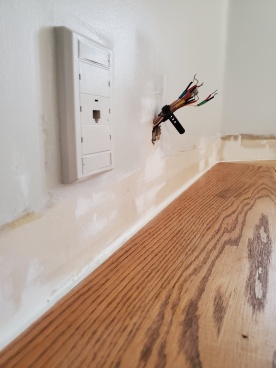 Look at that difference! From freshly ripped off trim, to a patched and sanded wall with caulk filler, to a caulked gap, ready to be painted!

I needed to wait overnight to let the caulk dry because I had to use so much of it in some areas. The next day, I was able to finally paint primer + 2 coats of repose gray to finish the project!

It’s certainly not perfect, but I think it looks 100x better. I love the clean lines and simple look of the ledge now!

I didn’t want to spend any money on decor, so I decided to shop my house for frames, plants, and other decor to put some finishing touches on the space. (Psst – if you’re one of my very few OG blog readers, you might recognize that “W” as our wedding guest book!) 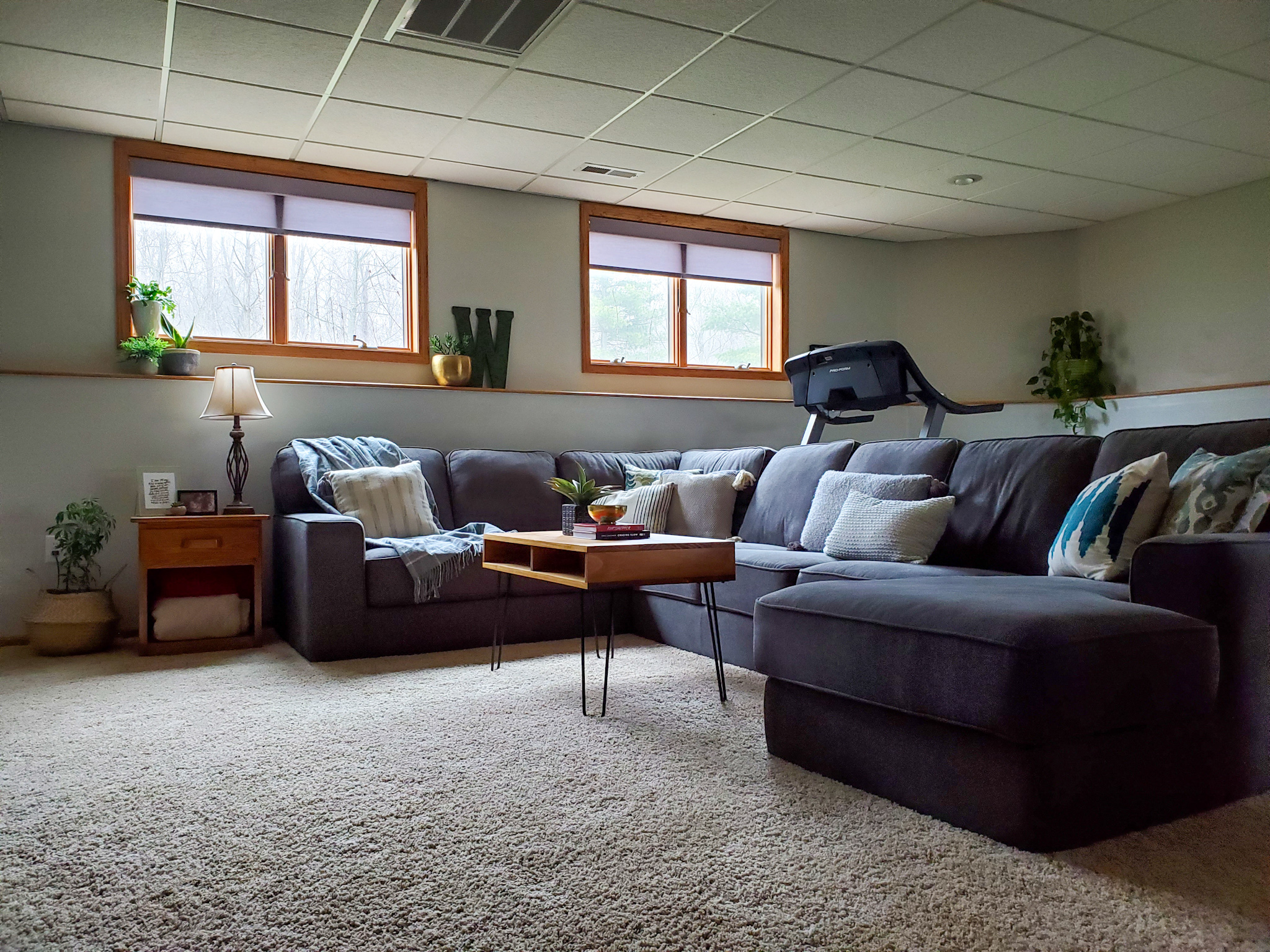 I follow a few other DIY bloggers and home designers and sometimes it seems like many people wait until a room is 100% DONE to post the “final” picture. But I don’t want to wait to celebrate this progress. This room is far from done and I still have plans for this space. Eventually we want to replace baseboards and window trim and get new carpet throughout. I’d love to update the side table and lamp and find a new place for the treadmill still hanging out behind the couch. Our TV is still on a slightly bent folding table and we plan to mount it and have a nicer console underneath. But for now, I’m practicing contentment and celebrating the progress that has been made. 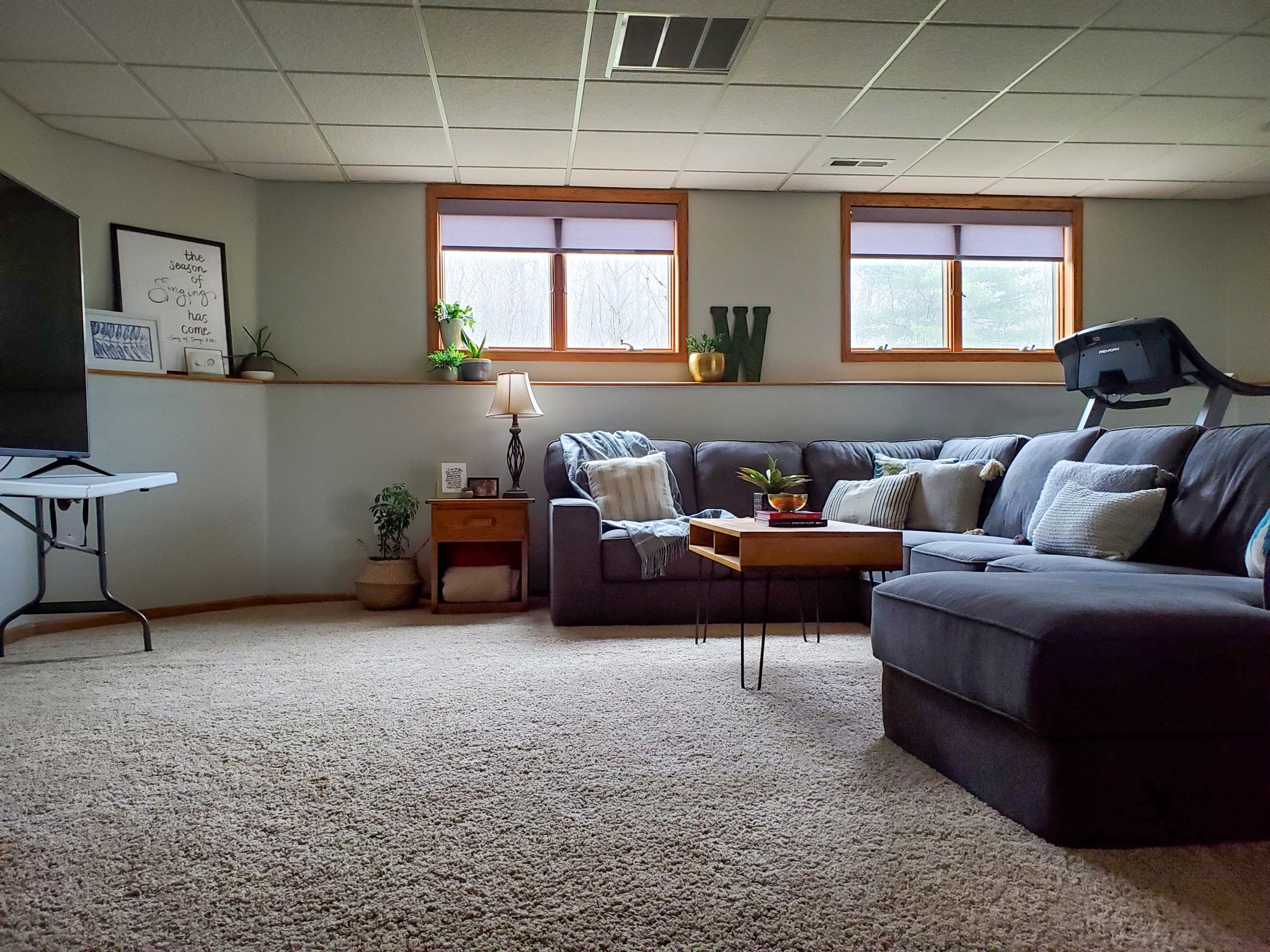 The cost of this project was pretty minimal. I spent around $100 on paint + primer and about $13 on the extra tube of caulk + caulk filler . Other than that, I already had all the supplies needed and I shopped my own house for decor. It just took some time and work . . . and strategically placed decor like picture frames hiding unused wires and internet jacks and a plant in a basket hiding the lamp cord. The space is definitely improved and I love the simple but significant transformation! 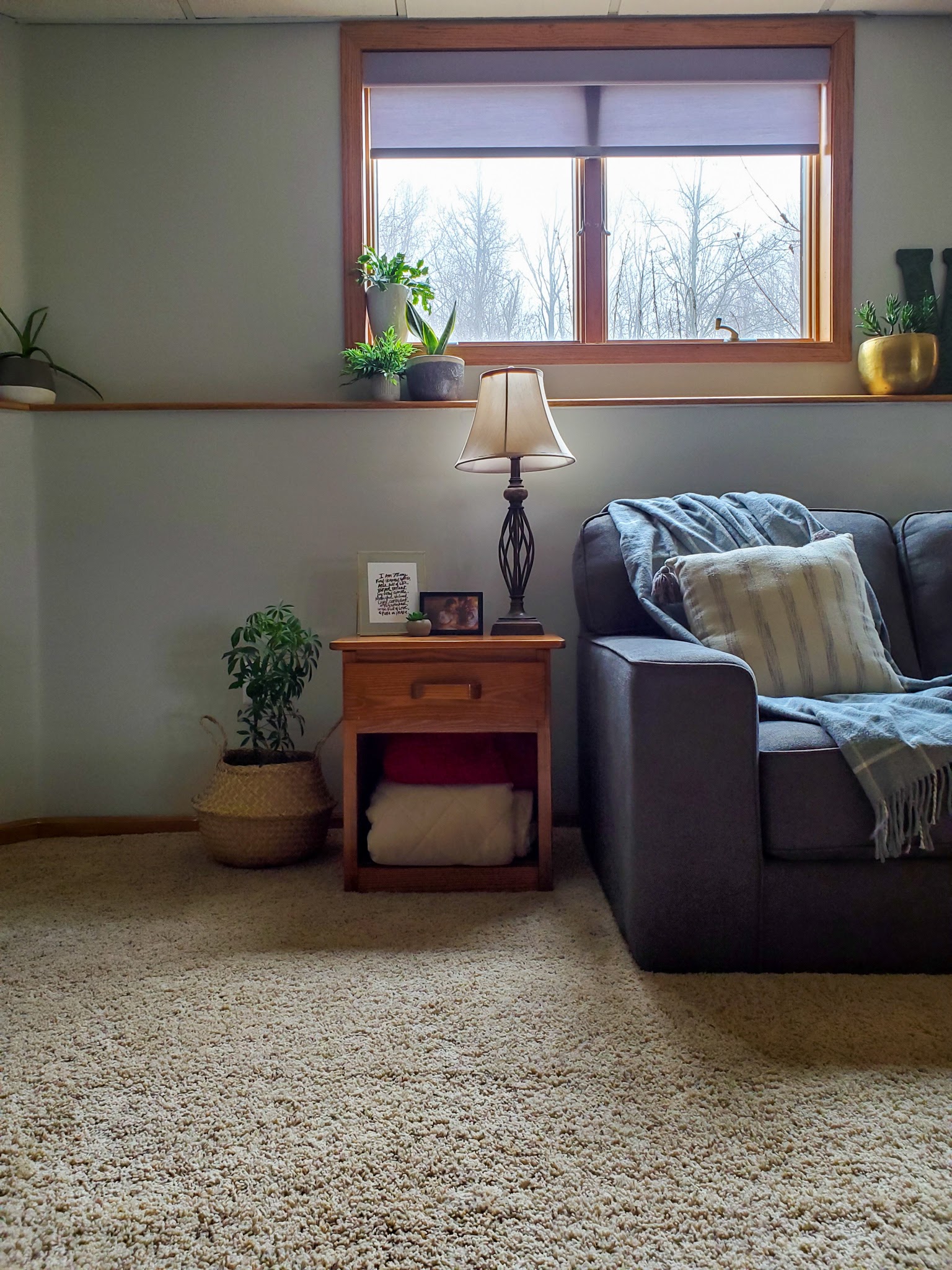 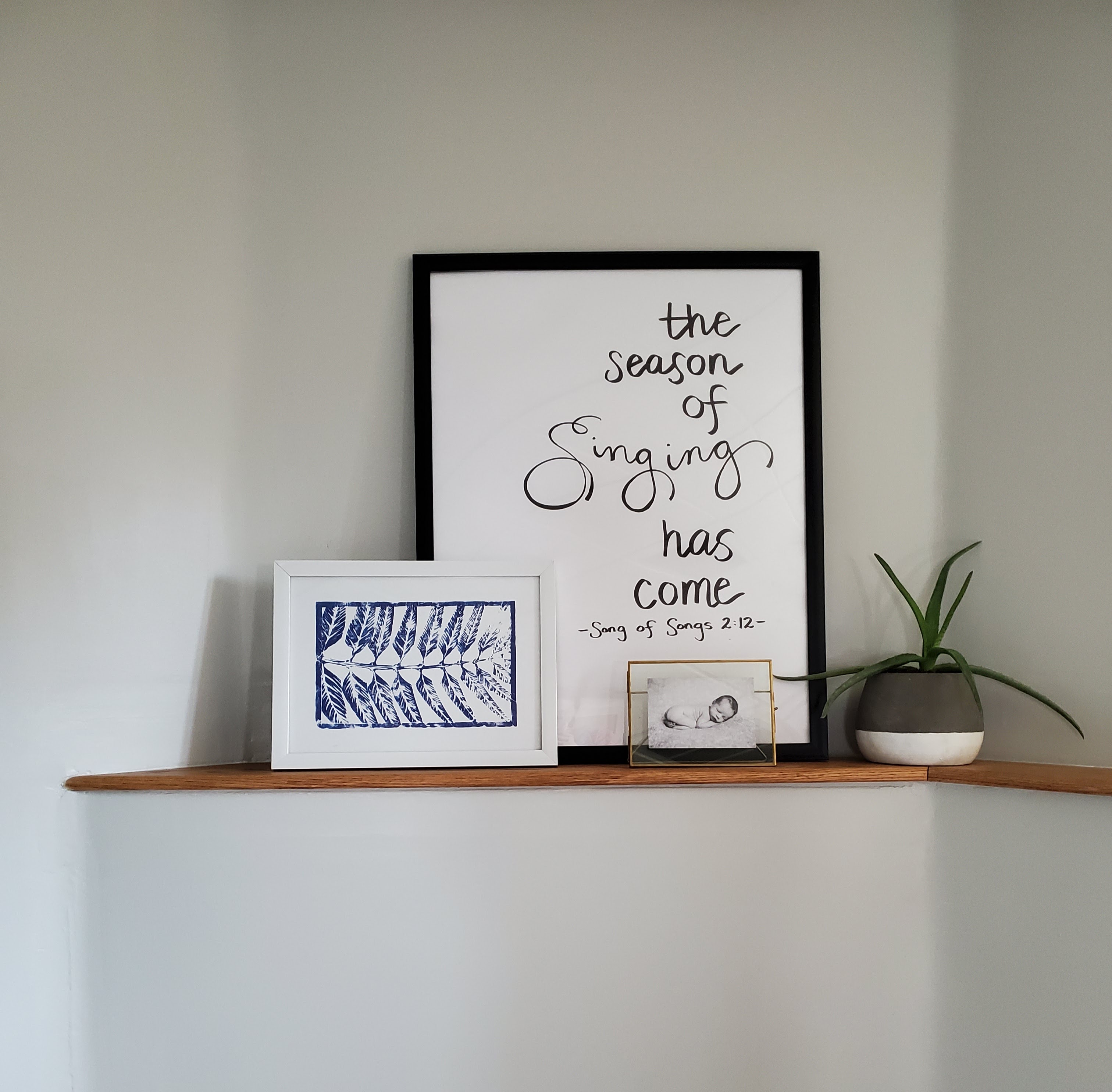